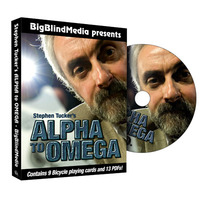 Today, when you order "Alpha to Omega by Stephen Tucker & Big Blind Media - DVD", you'll instantly be emailed a Penguin Magic gift certificate. You can spend it on anything you like at Penguin, just like cash. Just complete your order as normal, and within seconds you'll get an email with your gift certificate.

Stephen Tucker's 'Omega' has long been hailed as one of the greatest packet tricks ever created. Simple to do, fully examinable and devastatingly impressive, it will knock your spectators for six!

So what is Omega?

You have two sets of four of a kind (let's say, two sets of Aces). One set is tabled. One set is placed behind your back. You have ANY Ace named. Seconds later, this ace is face down, in the set behind your back, and... it has a different coloured back to the other three! You now rub their freely named Ace on your sleeve and its face completely vanishes!

THESE FOUR CARDS ARE NOW EXAMINABLE!

BUT THAT'S NOT ALL... Now, you spread the tabled set of face down Aces (that have been in full view throughout) and their named Ace is face up!

BUT THAT'S NOT ALL... now someone removes the face up Ace and it has a different coloured back to the other three!

BUT THAT'S NOT ALL... the shell-shocked spectator flips over the three remaining face down Aces only to discover that they are all BLANK! THEIR NAMED CARD WAS THE ONLY ONE THEY COULD HAVE CHOSEN!

Now for the amazing bit - they can name ANY Ace! (It can be different every time you perform).

There are no false counts - The handling looks the same every time!

There are no specially printed cards! (No need to 'ever' buy an expensive replacement set!)

100% self-working? Not quite, but Omega is incredibly easy to perform!

Stephen Tucker teaches you all the inside workings of this fabulous routine, PLUS five more variations that take the principle and exploit it in amazing ways!

Plus: An extensive range of PDF material for you to print out. These pdfs include many specially designed cards and images (ESP cards etc.) for some of the routines.

* BONUS * On top of the 'stuffed-to-the-gills greatness' of the Omega material, you'll also get two bonus Tucker routines. And these aren't throw away ideas - oh no - these are bona fide CLASSICS! (Indeed, they have a combined RRP of £37 if bought separately!).

Exhibit 'A' (the case of the unsolved murder) - a Cluedo/CSI/Murder Mystery type of routine once performed on UK TV by Simon Lovell.

Matrix Reloaded - A very, very weird coin matrix that can be performed with or without coins!

"Superb! Omega is the most baffling and incredible packet trick I've seen in years. Magicians will enjoy performing it as much as their audiences will love watching it!"
- Jerry Sadowitz

"Goldstein, Duvivier and Bannon all make use of the 'Parade Of The Kings' gimmick. For my money, Tucker's Omega is the best and uses examinable cards!"
- Dr. Peter Moffat

"Omega is arguably the best non-gaffed version of Twisted Sisters you will see. If you don't know this, I think it will fool you".
- Peter Duffie
Questions about this product

Recommended Report this review
Pro Privacy ON (login to see reviewer names) on April 2nd, 2010
(This review is for Alpha to Omega by Stephen Tucker & Big Blind Media - DVD)
This is almost a great effect. Fairly easy to do, and it really does baffle people. I just wish there was some way to clean up the presentation and make the "behind the back" part feel less awkward. So far, I haven't come up with any ideas.

I also think the "blank reveal" should be eliminated. In my mind, this provides symmetry to the two reveals that could lead a smart spectator back to the method. I just don't think it's worth it. The first reveal is strong enough as it is.

The bonus materials are pretty good, however they're not different enough from the main effect to be considered "additional" effects. They're more like optional variations. "The Amazing Four Aces Trick" is particularly good, but it does require a pretty good amount of prep. However, I think it's worth it because it hits just as hard, it adds some humor, and the book provides the requisite cover that allows you to avoid having to go behind your back with the cards.
1 of 1 magicians found this helpful.
Did this review help you? Do you want to respond to this review?

Excellent! Report this review
Pro Privacy ON (login to see reviewer names) on November 27th, 2012
(This review is for Alpha to Omega by Stephen Tucker & Big Blind Media - DVD)
Really good DVD. The main effect is tremendous, and there are many ways to perform it. I agree with another reviewer that the effect could be more powerful with only one reveal, not multiple. The DVD has several other effects that I think are equally strong if not even better than the one presented. I particularly like the ESP card effect. He also shows you how to make your own cards for different effects. Strongly recommended!
Did this review help you? Do you want to respond to this review?
Bestsellers