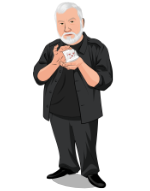 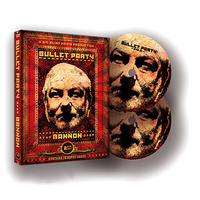 Today, when you order "Bullet Party (2 DVD Set) by John Bannon & Big Blind Media - DVD", you'll instantly be emailed a Penguin Magic gift certificate. You can spend it on anything you like at Penguin, just like cash. Just complete your order as normal, and within seconds you'll get an email with your gift certificate.

Become a card-carrying member of the Bullet Party. John Bannon, internationally-renowned magic guru, is back, unleashing two new discs crammed with fantastic material. An unabashed packet trick aficionado, Bannon presents two new red-hot fractal blockbusters, Bullet Party and Mega 'Wave. (Fractal - high impact packet tricks that end clean and examinable). Simple to do. Multiple climaxes. And killer, killer magic. You get all the necessary cards (13 USPCC printed pasteboards). With just a couple of easy moves, you'll have two miracles on your hands that you will perform every time you do magic. If two sophisticated "fractal" packet tricks are not enough, Bannon brings on another eleven jaw-dropping card tricks (and one brilliant in-the-hands false cut). All with regular cards. All virtually impromptu. All with no difficult moves. VOLUME I

VOLUME II BULLET PARTY - An Ace of Spades and three Jokers. Follow the Ace and ignore the Jokers-if you can-before the bullets start flying and all four cards change. What once were Jokers are now the Ace of Clubs, Hearts, and Diamonds. Complete with subtitles: Each new Ace has a message for the spectator written on its face. Finally, the Ace of Spades is flipped over to reveal a different colour back AND another note for the audience. Remember - everything is examinable. There is nothing for the audience to find. Easy to do. Easy reset. Absolutely stunning magic!! MEGA 'WAVE - The performer exhibits two sets of four cards. The first consists of the four Queens. The second packet is wrapped with a wide band. Any Queen is named (NO force). Demonstrating the difference between sleight-of-hand magic and mentalism, you take Queens and do a "move" (not really) to reverse the named Queen reversed in the centre of the packet. That's 'sleight of hand magic'. Demonstrating psychic ability, you take the banded packet (which has been in plain sight), remove the band, and show that the named Queen is reversed in the middle of the packet. Somehow, you knew ahead of time which Queen would be selected! To remove all doubt, the named Queen has a different colored back! And, it's the only Queen in the packet, the rest are all Jokers! All of these cards may be examined. No extra cards are used; nothing is added or taken away. The cards are in plain sight at all times, nothing is placed behind the performer's back or under the table. And best of all - the trick is easy to do! WAY MORE. Eleven more card tricks. Four unusual Ace routines to be done together or separately. Produce. Re-produce. Assemble. Change. Disassemble. Bannon's faux-poker fractal matching trick that now resets instantly. A fabulous, self-working poker deal. Plus transpositions, transformations, and transportations. Modern, impromptu card magic, expertly wrought and expertly taught. Welcome to the party!Disc 1 Running Time Approximately: 1hr 4minDisc 2 Running Time Approximately: 1hr 2min PRAISE FOR BULLET PARTY:"If refudiate is officially a new word, I want to add another one to the lexicon - Bannonized. That's the only way to describe how I felt after the barrage of miracles on these DVDs."- David Acer "Bannon and Big Blind Media has done it again! Another hit on their hands!"- Bill Malone "John Bannon is one of the greats -- and this DVD set is simply that -- great!"- Peter Duffie "The highest compliment I can give Bulletparty is that ONLY John Bannon could have pulled off this project, and I'm glad he did."- Joshua Jay "It's another winner, and combining the genius of John Bannon with the creative powerhouse that is Big Blind Media, we have a collection that again sets a new standard that many others can only hope to achieve."- Lance Pierce "Bannon has done it again! Bullet Party picks up where Bullets After Dark left off, and it's stronger and more commercial than ever."- John Guastaferro "Buy this DVD set and study it closely - it is superb"'- Tim Trono "Classic Bannon. What are you waiting for?"- BicycleCards.co.uk "The best DVD release of 2011... ALREADY."- Andi Gladwin
Questions about this product

wave party Report this review
Pro Privacy ON (login to see reviewer names) on December 8th, 2015
(This review is for Bullet Party (2 DVD Set) by John Bannon & Big Blind Media - DVD)
Both Bullet Party and Mega Wave make each dvd worthwhile.
The teaching is crystal clear and the effects are fantastic.
Did this review help you? Do you want to respond to this review?

Ingenious Report this review
Verified buyer Pro Privacy ON (login to see reviewer names) on August 3rd, 2011
(This review is for Bullet Party (2 DVD Set) by John Bannon & Big Blind Media - DVD)
John Bannon has some ingenious and often far simpler-to-do-than-they-appear tricks on here. I am not saying they don't need some practice to look good; I am only saying that I was expecting more difficult and complex sleights. Mega Wave is worth the price of the DVD(s) alone!
Did this review help you? Do you want to respond to this review?
Bestsellers