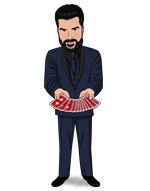 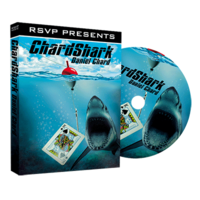 Today, when you order "Chardshark by Daniel Chard and RSVP Magic - DVD", you'll instantly be emailed a Penguin Magic gift certificate. You can spend it on anything you like at Penguin, just like cash. Just complete your order as normal, and within seconds you'll get an email with your gift certificate.

Welcome to 'Chardshark' by Daniel Chard, a new name in card magic that we know you'll be hearing a lot about in the near future. This DVD features 10 stunning routines that are hard hitting, punchy and sure to thrill any audience. Just look at the reactions on the trailer that this magic gets and best of all, they're not all as hard as you'd think learn.

Decompression: The four aces compress into two deuces, then to a four before completely vanishing. Then we turn back time and go in reverse....This is killer!

Kickback Bonanza: Four queens trap a selection twice under impossible conditions, then a kickback finish that will leave their jaws on the floor. This is Dan's go to card routine

Fiddle with Biddle: The Biddle trick taken to the next level with some great touches which make this routine a real fooler!

A Night with Hofsinzer : The classic effect streamlined using a great move of Ed Marlos, direct and very strong

Sequential Sandwich: The jokers are used to find the Ace to four of a named suit one at a time, with an ending which has caught some top name magicians off guard

Four My Mates: A sandwich effect where the selection rises visually up through the pack and then finds his three mates on the journey, friends reunited would be proud!

Cloaked Inversion: An impossible 3 phase inversion routine which utilises 'the cloaked reversal', taught on disc for the first time and a complete deck reversal using only one hand!

Mouthy Transpo: A two phase transposition which is direct and hard hitting, with an ending which will catch you off guard

Taking the Plunge: the plunger principe used in conjunction with two special assistants which locate a selection and cause two cards to change places

Toolbox Section: featuring a more in-depth look at some of the sleights used

A Must For Card Magicians Report this review
Pro Privacy ON (login to see reviewer names) on March 27th, 2013
(This review is for Chardshark by Daniel Chard and RSVP Magic - DVD)
Whilst the content of this DVD will take time and effort to learn, it is well worth it for the array of sleights and moves you will then have in your arsenal. Some people have criticised this DVD as only being "card tricks to do to other magicians" but if you watch the spectators Daniel performs his effects to you will see the impact they have on laymen. Even if you only like the look of a few of the tricks you can learn from this DVD, the 'toolbox' section, allowing you to focus on learning specific moves and sleights, is worth the price of the DVD alone (considering you would pay the same price for just one of Daryl's 'Encyclopedia of...' DVDs).

In short, if you are an experienced card handler looking for something meaty to get stuck in to, or someone looking to improve their card handling skills, this DVD is for you. Highly recommended.
Did this review help you? Do you want to respond to this review?
Bestsellers