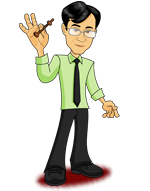 Today, when you order "Coincidence (Korea) by Kreis", you'll instantly be emailed a Penguin Magic gift certificate. You can spend it on anything you like at Penguin, just like cash. Just complete your order as normal, and within seconds you'll get an email with your gift certificate.

There are four different coins (borrowed) placed on top of a small box. Also the box lid has four different numbers (1, 2, 3, and 4) printed on it.
The magician moves the four coins to the four positions according to an order chosen by a spectator. When the spectator removes the lid, another four coins are found inside the box in the chosen order.These prediction coins are not just placed, but firmly fixed to the box.

Awesome! Report this review
Verified buyer Pro Privacy ON (login to see reviewer names) on September 21st, 2013
(This review is for Coincidence (Korea) by Kreis)
An awesome prediction that can be examined. I'm giving it 4 stars because the reset has to be done in secret.
Did this review help you? Do you want to respond to this review?
Bestsellers