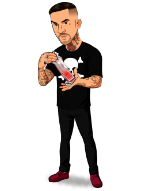 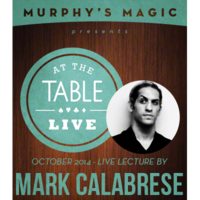 Today, when you order "At the Table Live Lecture - Mark Calabrese 10/29/2014", you'll instantly be emailed a Penguin Magic gift certificate. You can spend it on anything you like at Penguin, just like cash. Just complete your order as normal, and within seconds you'll get an email with your gift certificate.

Mark Calabrese: Mark is a real worker. He has made his living performing magic for a number of years. He also was a Creative Consultant for the one and only Criss Angel. You also may have seen him on the hit SyFy show Wizard Wars, where Penn praised him for his performance style. His effects have fooled some of the top names in all of magic, and he will be sharing some of those effects with you, At the Table.

DVS - Mark will be talking about this technique in great detail and cover new ideas and routines that never made it on to the DVD!

Quincy - A signed card vanishes from the deck under impossible conditions and reappears anywhere the magician so desires!

M.O.P. - An open prediction so clean, you might...just might think it's your destiny!

Grab - Mark will be tipping the work to his pet effect along with some updated routines and ideas that were not published in the original release!

Traction - Mark's ace cutting routine with a twist! ANY four of a kind is cut to, card by card and in the end, changes into the four aces! This can be done with a BORROWED deck! This is a real fooler!

IF*$@%ed - Reveal a text sent to your phone without ever looking at the text! Repeat, the magician NEVER looks at their phone!

This is fantastic Report this review
Verified buyer Pro Privacy ON (login to see reviewer names) on September 11th, 2016
(This review is for At the Table Live Lecture - Mark Calabrese 10/29/2014)
This is a must get! You will learn a great variety of effects and I can guarantee you that you will walk out using most if not all the routines you learn here. From looking like a card wizard to a mind reader you can find it all in Mark's lecture. Get it now, what are you waiting for?
1 of 1 magicians found this helpful.
Did this review help you? Do you want to respond to this review?
Bestsellers