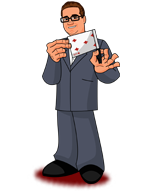 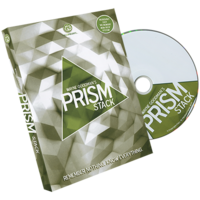 Today, when you order "Prism by Wayne Goodman and Dave Forrest - DVD", you'll instantly be emailed a Penguin Magic gift certificate. You can spend it on anything you like at Penguin, just like cash. Just complete your order as normal, and within seconds you'll get an email with your gift certificate.

(2 customer reviews)
+ Add to Cart
Review Wishlist
In stock: usually ships within 24 hours!
Order in the next 4 hours 39 minutes and it will ship TODAY!
black-friday-2019
card
street
Tweet

Have you ever wanted to memorize an entire deck cards? Well, thanks to Wayne Goodman's 'PRISM' stack, you don't have to! This super-simple system will allow you to know with absolute certainty, the exact card at ANY named position between 1 and 52 - INSTANTLY!

The power of knowing which card lies at any given numerical position is immense! This has been one of the hardcore card handling tools for decades and there was really only one way to have it at your disposal - by drilling it into your brain through forced memorization. Until now, that is...

Wayne Goodman presents his SUPER easy 'PRISM' stack that operates using the most basic and rudimentary system that will allow you to instantly calculate which card is at which position in the deck. Incredibly, with only 5 minutes introduction to the 'PRISM' stack, you'll be accurately naming cards at given values without breaking a sweat and remember - there is ZERO memorization involved! As well as the stack and system being taught in full detail, you'll also learn amazing effects to perform with your newly acquired super-skill! And, Wayne has stretched this system to its limits so, as well as AMAZING card effects, you'll also learn a KILLER drawing duplication using the system!

Good but limited Report this review
Verified buyer Pro Privacy ON (login to see reviewer names) on June 10th, 2016
(This review is for Prism by Wayne Goodman and Dave Forrest - DVD)
I couldn't believe the hype about a stack you could learn in five minutes, but it really is true. Watch this video once and you will have the concept down pat. You really will be able to have a spectator name any number and you can name the card at that number almost instantly. You can spread the deck out and the spectator will never notice any repeating pattern or anything like that.

However, it must be mentioned that you are only memorizing half the deck. By moving the top card to the bottom your even-numbered stack suddenly becomes odd numbered and you can still name the card at any number in the deck, but you can't just let the spectator name any card and you find it.

The system works when a number is called, and really only then. If a card is called for, you will have to struggle to figure its spot, and then it may not have one since you are memorizing only half the cards in the deck. So being fair, you really do have a (mostly) memorized deck routine here you can use when the situation arises (and they give you a couple of good routines to use with this), but it's not perfect.

I see this as the best choice for someone wanting to do a SCAAN (Some Cards At Any Number) routine rather than the ACAAN routine. If you want to have a memorized option but don't want to spend hours learning the hard ones, you can have this under your belt in less than 10 minutes and remember it weeks later even after not using it. Setup takes a few minutes as with any memorized deck, but there really is no discernible pattern. You can know the position of all the aces with one slight modification they mention too.

If you really want a memorized deck routine, start here. I really wish this system worked for the entire deck rather than every other card, but it unfortunately doesn't. It still has great potential though.
2 of 2 magicians found this helpful.
Did this review help you? Do you want to respond to this review?

Great System Report this review
Pro Privacy ON (login to see reviewer names) on June 30th, 2017
(This review is for Prism by Wayne Goodman and Dave Forrest - DVD)
I'm really happy with this system, it's every bit as easy as advertised and as everyone has said in the reviews I've read. The only thing I didn't like is Dave Forrest constantly interrupting Wayne Goodman -- I kept yelling "Shut up, let the man talk!" at the screen every time he cut in on Wayne, which seemed to be every five seconds. Still, it's just a quibble: the system itself is very solid, and I can't wait to try this out in my act!
1 of 1 magicians found this helpful.
Did this review help you? Do you want to respond to this review?
Bestsellers