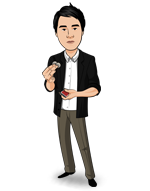 Today, when you order "SVENGALI by Mr. Pearl - DVD", you'll instantly be emailed a Penguin Magic gift certificate. You can spend it on anything you like at Penguin, just like cash. Just complete your order as normal, and within seconds you'll get an email with your gift certificate.

Explore the full potential of the Svengali deck!

We've all seen the Svengali deck before, and we've all probably used it. But WHEN was the LAST time you used it?

SVENGALI - A DVD brought to you by one of the most influential close-up magicians, Mr. Pearl.

Ten of the best routines meticulously chosen by Mr. Pearl himself.

Prepare yourself for the most innovative and captivating routines you've seen yet!

1. Stab:
The selected card is found by the spectator themselves. No "suspicious" movements involved!

4. Memory Test:
The spectator finds the selected card themselves with all the cards face down!

7. Trilby:
The spectator freely makes a choice, yet somehow still ends up with the predicted card.

8. Svengali:
Did you know 'Svengali' was a hypnotist? This routine will surely make your spectator feel like they've been hypnotized! All the cards visually change to their selected card, and then are restored back to a normal deck.

9. Oracle:
This is one of the best routines that can be performed with a Svengali Deck! The magician predicts the future with beautiful subtlety as the secret of the Svengali deck is preserved.

10. Hypnosis:
The entire deck visually changes again and again, just as if you're hypnotized. You won't believe your eyes!

11. Bonus Effect: Card Stab:
A chosen card is lost in the middle of the deck. Then, another card is shot into the deck. Magically, the card has shot right to the position of the chosen card.

How disappointing Report this review
Verified buyer Pro Privacy ON (login to see reviewer names) on February 6th, 2018
(This review is for SVENGALI by Mr. Pearl - DVD)
I purchased this DVD based on the strength of Mr. Pearl's previous releases. Although well presented, this DVD is primarily a collection of information and tricks that have been around for many years. I really don't see what Mr. Pearl has brought to the body of magic knowledge with this release. I would not recommend this to anyone but a beginner, and even then certainly not at this price.
1 of 2 magicians found this helpful.
Did this review help you? Do you want to respond to this review?

I have to disagree with the previous review. Report this review
Pro Privacy ON (login to see reviewer names) on May 16th, 2019
(This review is for SVENGALI by Mr. Pearl - DVD)
I've been doing magic for more than 15 years now and I consider myself as a seasoned magician (he said modestly...). I was actually very surprised by the quality of the materials presented on the DVD. Anyone who wants to further his/her knowledge in Svengali Deck, I highly recommend this.
Did this review help you? Do you want to respond to this review?
Bestsellers