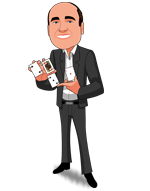 Today, when you order "Working Repertoire by Paul Roberts", you'll instantly be emailed a Penguin Magic gift certificate. You can spend it on anything you like at Penguin, just like cash. Just complete your order as normal, and within seconds you'll get an email with your gift certificate.

Paul's working repertoire. The tricks, sleights, patter and psychology that has earned him his living for many years as a working professional. Paul is interviewed by HARRY ROBSON and SHAUN MCCREE, two of the best and busiest magicians in the country. They delve into the how's and why's of performing for REAL people. Some of the tricks include:

THAT'S NOT IT - A two-card transposition that occurs between two spectators and in their hands!

NUMBER'S UP - A signed card is revealed face up at a number chosen by the spectator.

THINK OF CARD - A spectator is asked to think of a card while another spectator selects a card from the deck. The chosen card and thought-of card match perfectly!

RING FLASH - A great effect by Wayne Dobson: A borrowed ring is vanished and reappears on a string with a big FLASH!!!

Also included in the interview is a discussion on Jazz Magic.

This download is a must have if you're looking for real working effects, whether you are doing stage, parlour or close up...these secrets will serve you well!

Very Helpful Report this review
Verified buyer Pro Privacy ON (login to see reviewer names) on December 27th, 2018
(This review is for Working Repertoire by Paul Roberts)
This was a very well done video. Everything was workable and was time tested by Paul. He shows how these effects work in the field and then breaks them down in great detail. The review of the sleights & moves at the end are worth the entire cost of the video.
Did this review help you? Do you want to respond to this review?

Wow Report this review
Verified buyer Pro Privacy ON (login to see reviewer names) on October 29th, 2018
(This review is for Working Repertoire by Paul Roberts)
I really enjoyed watching this whole video. It was entertaining as well as enlightening. I can’t wait to put a few of these into my next set ! This download was way underpriced ! I usually don’t review until I have audience tested some of the routines but there is just so much here!
Did this review help you? Do you want to respond to this review?
Bestsellers