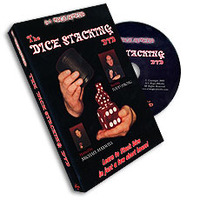 Today, when you order "Dice Stacking Todd Strong, DVD", you'll instantly be emailed a Penguin Magic gift certificate. You can spend it on anything you like at Penguin, just like cash. Just complete your order as normal, and within seconds you'll get an email with your gift certificate.

A video that teaches you how to stack dice in just a few short hours! Dice Stacking is not only magical, but it's fun too! The art of scooping up a series of dice and stacking them one on top of the other is not nearly as hard as it looks. Professional juggler and entertainer Todd Strong has developed a method to easily teach you how to stack dice. In fact, using Todd's methods, you can learn to stack dice proficiently in just a few short hours. Dice stacking makes for a wonderful, magical interlude.Being a juggler, Todd has created numerous unique and visual stacking techniques, many of which magicians have never seen before, including fantastic aerial dice moves and two- handed dice stacking. You'll also learn how to stack 12 dice at a time! And host Michael Maxwell performs and explains Senator Clarke Crandall's Dice Stacking Routine. Hilarious, magical and entertaining, this one-of-a-kind routine is perfect as a unique magical showpiece.