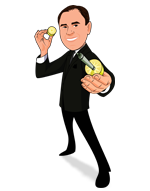 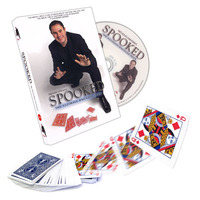 Today, when you order "Spooked by Nicholas Einhorn", you'll instantly be emailed a Penguin Magic gift certificate. You can spend it on anything you like at Penguin, just like cash. Just complete your order as normal, and within seconds you'll get an email with your gift certificate.

From a borrowed deck, a card is freely chosen and returned. The deck is isolated on the floor, away from the magician. Under complete control, the deck eerily begins to cut itself to a card in the centre. The card 'jumps' out and away from the deck and is revealed to be the selection. Everything can be handed out for immediate examination.

Filmed at The Centre for The Magic Arts, The Magic Circle's famous headquarters and home of 10,000 secrets. What better place to reveal a secret than within Europe's largest library of magic books. This is the first time Nicholas Einhorn has revealed the secret of Spooked on DVD. It is, without question a reputation making effect, which will be remembered by your spectators for a long, long time.

This instructional DVD covers all the subtleties, which can only be developed through thousands of performances. No detail is left uncovered and many updated techniques and tips are included which did not appear in the original and somewhat rare manuscript.

"Better than the haunted deck ever was."
- BILL MALONE


"This one's not a purchase it is an investment."
- BOB KOHLER


"That's the best trick I've ever seen and I'm not just saying that because you gave me three!"
- RICH MAROTTA


"This is a piece of pure magic."
- MICHAEL VINCENT


"The card jumping out of the deck is the most startling piece of magic I've ever seen."
- JACK AVIS


"I want one! That was beautiful."
- DAN FLESHMAN


"....the jumping card is a shocker...Spooked is worth your serious consideration. Recommended."
- MICHAEL CLOSE


"A quantum leap from Esoteric...It's taken the haunted deck way into the 21st Century."
- SIMON LOVELL


"Watching the deck move on the floor as I stood over it added a whole new and amazing dimension to this classic effect."
- STEVE BEDWELL

Comes complete with DVD, Special Gimmicks, and detailed instructions on how to perform this truly amazing illusion!!

Below is an amazing version performed by Cyril Takayama. It starts with a cool chopstick bit (which is not spooked), but wait until that is over-it's well worth it!

Card Deck NOT Included
Questions about this product

crazy reactions! Report this review
Pro Privacy ON (login to see reviewer names) on April 4th, 2010
(This review is for Spooked by Nicholas Einhorn)
If you truly want to make your audience jump out of their socks, THIS DOES IT! Easy to do, especially when you take Nicholas Einhorn's advice on the DVD. He gives you all the tips to really sell this effect. He takes the very basic rising card and turns it into a "OMG the deck is moving and my card flew out of the deck by some unreal force!" effect.
1 of 2 magicians found this helpful.
Did this review help you? Do you want to respond to this review?
Bestsellers