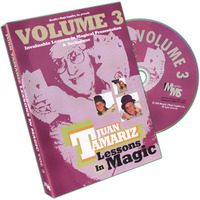 Today, when you order "Lessons in Magic Volume 3 by Juan Tamariz - DVD", you'll instantly be emailed a Penguin Magic gift certificate. You can spend it on anything you like at Penguin, just like cash. Just complete your order as normal, and within seconds you'll get an email with your gift certificate.

Juan is the consummate performer. Armed with only a deck of cards he can entertain a small group or a packed auditorium for hours. He is hilariously funny, but at the same time he'll fool you like you've never been fooled before. He is one of magic's greatest thinkers, a master of misdirection and a magic philosophy, and he has never had a large body of material recorded... until now! On this exclusive three-volume set of DVDs you will learn invaluable lessons in routining and construction, magical emotion, technique and presentation.

- The Centauros: An enchanting tale of myth, magic, and the sea constructed to be a beautiful, musical and magical interlude

- T.P.C.-The Tamariz Perpendicular Control: Learn Juan's closely-guarded secret sleight. Using this ingenious utility sleight you can do many things including, undetectably controlling and palming cards. Then learn three awesome effects utilizing The Perpendicular Control: A Number, Cards to Pocket, and The Rising Card.

- Doubly Ambitious: An Ambitious Card routine with two selections! They repeatedly rise in tandem to the top of the deck; a truly unique and highly magical version of this classic effect.

- 4 Aces: Juan's hilarious ace assembly wherein the spectator does all of the magic! A masterpiece of presentation! Running Time Approximately 81 min

Tamariz Rules Report this review
Verified buyer Pro Privacy ON (login to see reviewer names) on November 6th, 2012
(This review is for Lessons in Magic Volume 3 by Juan Tamariz - DVD)
I'm a fan, what can I say... theory, powerful effects... "Lessons in magic", that is what it is.
Did this review help you? Do you want to respond to this review?

Fantastic Report this review
Pro Privacy ON (login to see reviewer names) on April 10th, 2010
(This review is for Lessons in Magic Volume 3 by Juan Tamariz - DVD)
Juan Tamariz is a magical genius. I personally don't care for his wild and crazy performance style but the magic he creates is worth putting up with it. Lessons in Magic gives you some classics of card magic with Tamariz' personal touch. His thinking as he teaches the tricks is undeniably more valuable than the tricks themselves. These videos are not completely out of the range of intermediate magicians, but they are not the best resource for beginners.

This video features 1 of my favorite Tamariz routines, his doubly ambitious routine. I like this because it is the only 2 selection ambitious card routine that I know of
Did this review help you? Do you want to respond to this review?

The Greatest Report this review
Verified buyer Pro Privacy ON (login to see reviewer names) on April 7th, 2010
(This review is for Lessons in Magic Volume 3 by Juan Tamariz - DVD)
Card magician on the planet. He can be seen at the odd convention but the next best thing is this set of DVD's. There are not numerous tricks on each DVD however they are powerful and worth the $$. Each one has a routine or two that will find its way into your routines. The Sticker trick is a favorite and not as difficult as you may think to perform. All of his material is stong and kills when done well. Buy and do not be disapointed.
Did this review help you? Do you want to respond to this review?
Bestsellers