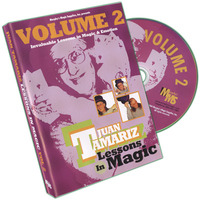 Today, when you order "Lessons in Magic Volume 2 by Juan Tamariz - DVD", you'll instantly be emailed a Penguin Magic gift certificate. You can spend it on anything you like at Penguin, just like cash. Just complete your order as normal, and within seconds you'll get an email with your gift certificate.

Juan Tamariz is a one-of -a-kind performer. A household name in his native Spain , he is one of the most unique and talented performers ever to grace our art. In the tradition of Vernon and Slydini he has blazed his own enchanted trail. His books on magic are required reading for any thinking student of magic. His repertoire is vast as well as legendary; he once performed for 74 weeks in a row on television. He is in constant demand and is often mobbed on the streets of Madrid by adoring fans. He is one of those especial performers that takes the spectators on a wonderful journey - a magical journey through the heart as well as the mind.

Juan is the consummate performer. Armed with only a deck of cards he can entertain a small group or a packed auditorium for hours. He is hilariously funny, but at the same time he'll fool you like you've never been fooled before. He is one of magic's greatest thinkers, a master of misdirection and a magic philosophy, and he has never had a large body of material recorded... until now! On this exclusive three-volume set of DVDs you will learn invaluable lessons in routining and construction, magical emotion, technique and presentation.

The Secret of Magic: Take the audience in a journey through a real visual illusion; then the illusion becomes reality!

Four of a Kind: A study in psychologically leading the audience's emotions and the use of body language to subconsciously build suspense!

El Cochecito: As performed by Juan on The World's Greatest magic Television Special! This is the real work on magic and emotion- taking the audience back to childhood, capturing their imagination and sense of wonder through the use of a simple toy car. This is a prime example of how to take an innocent prop and turn it into a magical showpiece!

The Cannibals: One of Juan's signature pieces. Juan's presentation of this classic plot is a real work of art. It elevates the storyline to an emotional, audience-pleasing, interactive adventure! Running Time Approximately 88 min

Awesome Report this review
Pro Privacy ON (login to see reviewer names) on April 10th, 2010
(This review is for Lessons in Magic Volume 2 by Juan Tamariz - DVD)
Juan Tamariz is a magical genius. I personally don't care for his wild and crazy performance style but the magic he creates is worth putting up with it. Lessons in Magic gives you some classics of card magic with Tamariz' personal touch. His thinking as he teaches the tricks is undeniably more valuable than the tricks themselves. These videos are not completely out of the range of intermediate magicians, but they are not the best resource for beginners.

This video features an item that Tamariz is well known for, El Cochito. I personally don't care for the routine, and it will require the purchase of a special prop
3 of 3 magicians found this helpful.
Did this review help you? Do you want to respond to this review?

The Best Report this review
Verified buyer Pro Privacy ON (login to see reviewer names) on April 7th, 2010
(This review is for Lessons in Magic Volume 2 by Juan Tamariz - DVD)
Card magician on the planet. He can be seen at the odd convention but the next best thing is this set of DVD's. There are not numerous tricks on each DVD however they are powerful and worth the $$. Each one has a routine or two that will find its way into your routines. The Card Buggy routine in this one is particularly strong as all his material is. You will need the special toy car to make it happen but this routine to your own style is really good for all ages. Buy and do not be disapointed.
2 of 2 magicians found this helpful.
Did this review help you? Do you want to respond to this review?

Tamariz Rules Report this review
Verified buyer Pro Privacy ON (login to see reviewer names) on November 6th, 2012
(This review is for Lessons in Magic Volume 2 by Juan Tamariz - DVD)
I'm a fan, what can I say... theory, powerful effects... "Lessons in magic", that is what it is.
Did this review help you? Do you want to respond to this review?
Bestsellers