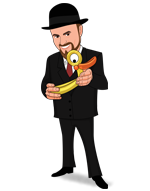 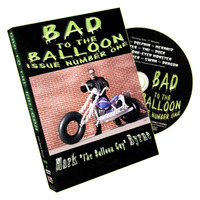 Today, when you order "Bad To The Balloon by Mark Byrne - Volume 1 - DVD", you'll instantly be emailed a Penguin Magic gift certificate. You can spend it on anything you like at Penguin, just like cash. Just complete your order as normal, and within seconds you'll get an email with your gift certificate.

Bad To The Balloon by Mark Byrne - Volume 1 - DVD

Bad To The Balloon follows a renegade biker balloon artist (Mark Byrne) as he teaches how to make balloons cool. His goal in creating balloon hats is to make them fast and make them great. Most hats take 45 seconds to 2 minutes to create.There is a detailed twist menu for beginners.

If you can make a decent teddy bear, you can do most of the balloons on this DVD!!

Intermediate and advanced twisters will love the flow and ease of this learning style. Unlike any other balloon DVD filmed, it has original music and location shots for each figure.

Filmmaker Jason Jeter (Devotion Pictures) & Mark Byrne (Funny Money Productions) have done the impossible... a balloon DVD you won't fall asleep watching!! From the opening sequence to the last sculpture, they guarantee you will be impressed.

Quick Balloon Creations Report this review
Verified buyer Pro Privacy ON (login to see reviewer names) on December 1st, 2016
(This review is for Bad To The Balloon by Mark Byrne - Volume 1 - DVD)
This is a great DVD. I have already bought Volume 2.
Mark moves fast but so does line work. Still they are simple enough to learn. I highly recommend for serious Balloon Twisters.
3 of 3 magicians found this helpful.
Did this review help you? Do you want to respond to this review?

Impressive and quick Report this review
Verified buyer Pro Privacy ON (login to see reviewer names) on April 2nd, 2010
(This review is for Bad To The Balloon by Mark Byrne - Volume 1 - DVD)
The balloons taught on this DVD are both impressive and fast. Go beyond the norm and buy this DVD
3 of 4 magicians found this helpful.
Did this review help you? Do you want to respond to this review?

Genii Magazine Revue Report this review
Pro Privacy ON (login to see reviewer names) on November 28th, 2011
(This review is for Bad To The Balloon by Mark Byrne - Volume 1 - DVD)
This is what Genii Magazine thought of both DVDs:

"Florida magician and balloon artist Mark Byrnes two discs on balloon twisting caught me by surprise. Sure, weve all seen plenty of intriguing balloon art over the years, but unless balloon twisting is your thing, a how-to video might not seem like a particularly entertaining proposition.

Guess again. These discs dont just demonstrate the construction of two dozen excellent balloon figures; they also entertain while they teach. By the time the first disc was half finished, my whole family had migrated into the room to see what he was going to make next.

Both discs open with a music video made to a parody recording of Bad to the Bone entitled Bad to the Balloon. It sets up Mr. Byrne as this leather-wearing biker who isnt going to take any of your nonsense while hes making your balloon hat, and you better not give him any lip about it. Thats okay, because he doesnt give any lip either in these non-speaking vignettes.

The segments are shot on location in some outdoor setting that relates to the figure. Mr. Byrne, in sunglasses and a black t-shirt, twists the featured figure in each segment with speed and skill in realtime, giving the viewer a sense of how long it really will take to create the sculpture once mastered. A supply list for each figure serves as an opening caption at the beginning of the process. The construction is repeated in a closer shot, allowing better visibility of some of the more detailed techniques.

On disc one, the simple lines of the shark, dolphin, and swan figures are easy, effective likenesses. The mermaid and surfer were a degree of difficulty higher, and the dragon figure was surprisingly complex for something that could be done so efficiently. The tiki figure seemed like a waste of time, but I gave bonus points for including a sculpture of an electrical tower, an unusual choice but one with plenty of conversation potential. The family favorite on disc one was the duck, a rubber-ducky style duck with googly eyes that add action to a normally static art form.

Disc two has significantly more striking figures. Favorites included a monkey in a palm tree, a great dinosaur, and an unexpectedly good representation of a flamingo. The cow, penguin, and housefly all generated good responses from my judges; the cat was underwhelming. Some of these figures look strikingly like familiar cartoon characters  not exactly, but I wouldnt be surprised if some in your audience made the connections. On disc two youll also enjoy Dog Gone, a short tragicomedy about a boy and his balloon dog.

Notably, all of Mr. Byrnes figures are constructed as hats. This has practical value for the audience, as they can carry the figures around handsfree; less handling means a longer life for the sculptures. For performers who work primarily for kids, the value of costuming a child volunteer during a routine is well documented. If I did a lot of kid shows, Id definitely consider learning these and creating interactive magic routines with them.

The discs have a professional feel while still giving the sense that theyre not taking themselves too seriously. The non-verbal teaching approach makes them accessible to non-English speakers, and the music and gags in each segment give the presentation a surprising amount of energy for a disc that features absolutely no audience or spectator involvement. The teaching moves quickly and presumes at least some experience on the part of the twister, but both discs contain extra segments on twisting basics and a closer look at the specific techniques used in the figures, so even a newbie should be able to pick these up and learn to twist the figures.

Camera, sound, light, direction, and concept all came together resulting in two excellent discs. Performers who use balloon art in their work can certainly benefit from having these ideas and techniques in their repertoire, and the price is more than reasonable for the value delivered."
2 of 2 magicians found this helpful.
Did this review help you? Do you want to respond to this review?
Bestsellers