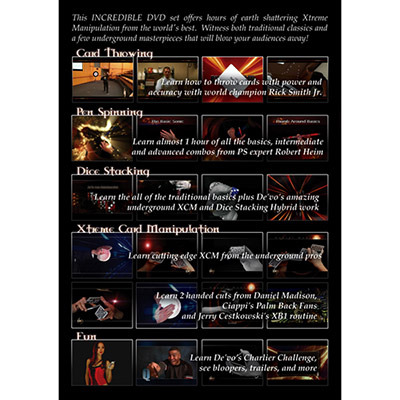 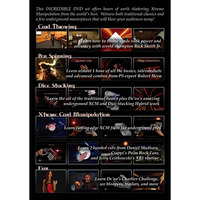 Today, when you order "Xtreme Beginners (2 DVD Set) Vol.2 - DVD", you'll instantly be emailed a Penguin Magic gift certificate. You can spend it on anything you like at Penguin, just like cash. Just complete your order as normal, and within seconds you'll get an email with your gift certificate.

This brand new 2 DVD set from Handlordz destroys the traditional thoughts of manipulation. Never before has such a diverse group of manipulators been assembled to create such an incredible DVD, packaged in classic Handlordz production style galore. This DVD is geared toward those that want to learn a variety of mind numbing manipulation.

What will you learn?

Pen Spinning - Almost 1 hour of pen spinning instructions from Germany's top pen spinner Robert Heim with layout by KAM. You will learn about pens, the basic moves, easy combos, and get to see some never before seen advanced/ideas. This section teaches with slow motion, visual instruction and voice over. There are far too many moves to list. Just watching the intro to this section on the DVD will leave you breathless. If you have ever wanted to learn about pen spinning, then look no further!

Card Throwing - Learn from the current World Record Holder in Card Throwing - from Rick Smith Jr. In this amazing section, Rick will teach you all the details on his power throw. From grip, stance and his release, you'll be throwing like a pro in no time. Rick also teaches the classic boomerang card and let's you in on 2 of his live performances to see how he incorporates card throwing into his own act. Chop vegetables and learn to throw with deadly accuracy using Rick's special throwing techniques.

Basic Dice Stacking - You will learn everything about cups, dice, surfaces and of course basic stacking in extreme detail. The teaching in this section is very visual, with 3D models, and repeated, slow motion instruction.

De'vo underground XCM/Dice hybrid work - De'vo will teach you his incredible moves, ideas, and combos. Yes, De'vo stacks dice with cards! Impossible? He doesn't think so. This section is worth the price alone if you are a card worker looking for something different to add to your act. Learn with incredible detail several different ways to stack dice with cards to include advanced ideas and combos that will destroy your audiences. You haven't seen anything like this before!

2-handed Cuts - Underground artist Daniel Madison will teach you no less than 5 of his favorite signature 2 handed cut combos. Learn with in-depth teaching from multiple angles and slow motion highlights.

XB Vol. 1 routine - Jerry Cestkowski will teach you a complete flowing routine by using moves found in the first Xtreme Beginnerz DVD set. He will also teach you 2 variations of his deck twirl.

Charlier Challenge - Many people know the classic Charlier Cut (basic one handed cut), from magicians, manipulators and just people off the street. De'vo created this challenge to use on those that know this classic move. Can you complete the challenge on your first try? If not, De'vo will teach you the ins and outs of this challenge so that you can use it in your own act.

Fun, Bloopers, and more! - witness hilarious bloopers, spend time with the Superhandz crew with a manipulating chef and much more.

This DVD set is hosted by Angela Funovits from the NBC show entitled "Phenomenon" with Criss Angel and Uri Geller. Angela will guide you through every aspect of this large DVD set.

We could have packaged any one of the manipulation sections as it's own DVD, however decided to put them altogether in one single very large 2 DVD set offering you the best of all worlds.

Great value Report this review
Pro Privacy ON (login to see reviewer names) on April 7th, 2010
(This review is for Xtreme Beginners (2 DVD Set) Vol.2 - DVD)
If you have ever thought that you wanted to learn Extreme manipulations and flourishes with things other than cards then this is the dvd set for you. There are a wide variety of items found on both dvds. The instructions are excellent and do a wonderful job teaching each trick step-by-step with the subtle details needed to get them down solid. If you have the first volume then you know the kind of quality that you will be getting with this set.
1 of 1 magicians found this helpful.
Did this review help you? Do you want to respond to this review?

WOW! Much more than I expected Report this review
Pro Privacy ON (login to see reviewer names) on April 3rd, 2010
(This review is for Xtreme Beginners (2 DVD Set) Vol.2 - DVD)
Volume two compliments volume one incredibly well. The xcm section on this DVD enhances things taught on the first volume, and teaches new things that are a real treat to learn.

The card throwing section of the DVD is worth it all by itself. Card throwing is one of the funnest things I've ever done and only took about a month of practice to really get the hang of it.

I was very impressed on the detail of teaching in all the areas, especially pen spinning, and I am a very satisfied customer for this one.
1 of 1 magicians found this helpful.
Did this review help you? Do you want to respond to this review?
Bestsellers