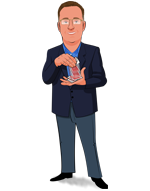 Today, when you order "The Vault - Think and Sync by John Carey", you'll instantly be emailed a Penguin Magic gift certificate. You can spend it on anything you like at Penguin, just like cash. Just complete your order as normal, and within seconds you'll get an email with your gift certificate.

Are you seeking some mentalism fun that will knock your spectator's socks off? How about if it were easy to do as well? Interested? Well, here it is: The Vault - Think and Sync. This is a self-working, impossible mind-reading revelation that can be done with a borrowed, shuffled deck of cards!

One of the UK's finest brings you another instant 'anytime anywhere' card magic classic!

Watch the accompanying video and see this amazing effect in action. This video download will teach YOU how to perform this card mind-reading miracle.

Revealing a card that is merely thought of - and almost self-working! Report this review
Pro Privacy ON (login to see reviewer names) on February 7th, 2018
(This review is for The Vault - Think and Sync by John Carey)
OVERVIEW:

John Carey has earned a reputation for streamlining effects and making already good magic even better. His strength is to rely on clever thinking and good presentation rather than complex moves and techniques, and he has the unique ability to distil routines of unnecessary sleights and complexities, and turn them into effects that retain the impact of the magic while ensuring that they are also very doable. In other words: clever plots and powerful magic without knuckle-busting moves. A superb example of this is his trick, Think and Sync.

Here's how it works: The spectator begins by genuinely shuffling the deck. He takes off a small packet of cards from the deck (less than 13), and secretly counts them to determine a random card number. He then freely/secretly thinks of any suit to go along with this, to determine a merely thought of card. The spectator returns the cards to the deck. The magician now selects a card from the deck, and amazingly proves he is in sync with the spectator by getting a perfect match.

What you get is access to the video, either by instant digital download or you can play it via streaming. The entire video is around 11 minutes long. The first three minutes of the video feature a performance of the trick (note that the performance in the video trailer is an edited/condensed version that leaves part of the routine out), with the tutorial/ taking up the remaining eight minutes.

The video is filmed in a studio, with John demonstrating and explaining the routine to another magician behind a table on a close-up mat. The camera angle is static and there are no close-ups, but since the trick's method is very straight forward, and relies more on a clever method rather than tricky sleight of hand, close-ups aren't necessary either, with John Carey explaining everything clearly.

John Carey does a great job in teaching all the details of Think and Sync, is explaining them to and discussing them with his fellow magician. The explanation has John going through the routine slowly, and explaining the method carefully, as well as the patter. He covers all the small elements of what to say very carefully. He has a very straight-forward and direct style, which is very clear and easy to follow, and makes for easy viewing and learning. John's strength is simplifying of routines, so he is a natural teacher who knows how to make things simple.

He's also very good at crediting his sources and influences, making frequent references to these throughout the video. The original trick was inspired by an Allan Kronzek routine first published in Genii magazine in 2012. John liked the idea but not the style, and so he used an idea from Bob Hummer to help improve the handling. He has experimented with more than one handling of this routine (more on that later), and I think the one he teaches in this video is the best.

Think and Sync as taught in this video involves no difficult sleights and is quite easy to learn. John Carey has been well described as having a "work smarter not harder" mindset in creating magic, which means that his effects rely on clever methods, plots, and presentation, rather than difficult finger-busting moves. This particular trick is very accessible, and can be performed after just a small amount of practice.

I've seen other instructional videos from John Carey, and compared with some of his other tricks, Think and Sync as taught in this video is one of the easier routines he has shared. It's almost self-working, with no real sleight of hand, because it relies more on psychological subtleties. This does mean that the patter needs to be carefully mastered to deal with several eventualities, so that it can be performed smoothly, but it's really quite easy to learn. Beginner magicians who know how to do a false shuffle will be able to learn and master it without too much difficulty.

I love how John Carey has the ability to reduce existing plots and tricks to their essentials, simplifying and refining effects so that they are easy to learn and perform, and yet pack a real punch. The Think and Sync routine is a fine example of his skill, because he has eliminated all excess fat, and streamlined it to make it very straight-forward to perform.

It is also quite a powerful trick. After all, being able to divine a card that your spectator has merely thought of? It seems truly impossible, and with good presentation and patter, the impact can really be strengthened. It's especially a trick that's good for fooling laymen.

The "hands off" quality of this effect is truly outstanding, especially the way John handles the ending of this trick. Without giving away the secret, I can say that John has come up with a very creative solution for the final phase. Where other magicians might resort to sleight of hand, John uses subtlety and patter to come up with a perfect outcome that really wows an audience. If you like John Bannon's approach to magic (Bannon apparently gives credit to Carey's Think and Sync for his trick AK47), then you'll really appreciate what John Carey offers, and his approach will give you good ideas that you can use in other contexts as well.

This video download isn't the only place where you'll find this particular routine. It's also in John Carey's book Crafted With Carey (2015), and was part of his 2014 lecture notes Streamlined. It has also been taught on other videos, including John Carey Collection 2 (Vanishing Inc Magic). It also appears under the name "Sync" in Sublime Self Working Card Tricks (Big Blind Media), and under the name "Think n Synch Revisited" in his 2015 video Classic Carey (RSVP Magic). However, these don't all use the same handling, for example in Sublime Self Working Card Tricks, first the spectator thinks of a suit, then cuts the deck and uses the value of the card cut to, after which the deck is shuffled and the magician finds either the card or its mate. In the Vanishing Inc Magic video, John first strips out the Jokers at the start of the routine, and requires more sleights in the first phase. This has the advantage that after the spectator counts the cards in their packet, they can return them anywhere to the deck and shuffle it, making the final result seem more impossible. The version from the Vault avoids any suspicion that might be caused by removing the Jokers from the deck, and eliminates the sleights John originally used, making the effect even easier to perform. So it would appear that this new download from The Vault is the smoothest version of the trick.

I'm just loving The Vault series from Bro Gilbert, and he has really picked out some gems to feature as part of it. John Carey deserves a lot of respect for his skils in creating streamlined magic, and Think and Sync is a wonderful example of a very straight forward trick that is easy to perform and yet has the capacity to blow the minds of lay people.

- BoardGameGeek reviewer EndersGame
1 of 1 magicians found this helpful.
Did this review help you? Do you want to respond to this review?

Obvious Report this review
Verified buyer Pro Privacy ON (login to see reviewer names) on July 15th, 2017
(This review is for The Vault - Think and Sync by John Carey)
I looked at the preview for this and thought I'd seen through it straight away
but then I read all the reviews talking about how cleaver the method is so I thought I was missing something, I wasn't! Unless this is your first card trick you should be able to work it out and save yourself the money.

AKOM
1 of 4 magicians found this helpful.
Did this review help you? 1 comment
Bestsellers