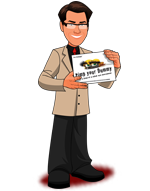 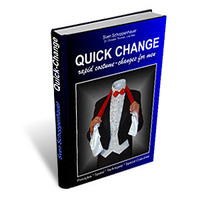 Today, when you order "Quick Change Book (For Men) by Lex Schoppi - Book", you'll instantly be emailed a Penguin Magic gift certificate. You can spend it on anything you like at Penguin, just like cash. Just complete your order as normal, and within seconds you'll get an email with your gift certificate.

Now Back in PRINT!

The FIRST and ORIGINAL English books to contain material on magic costume changes ever published in the WORLD were written in 1911/1912 by Will Goldston. In 1911 he published "The Magicians Annual" and in 1912 in "Exclusive Magical Secrets" in which 5 different Quick Change methods based on one tear away seam: The hook and eye fastener. In the last century Quick Changes have been described in more than 10 English books and pamphlets. The German book "Quick change" (published in 2003) was the most intensive publication to date and contained on 80 pages 5 different tried and tested methods of fastenings - methods for holding the materials closed, and ways to open them, the so-called "tear-away"seams. Well known Russian quick change artists termed one of the 5 methods of fastening as a "revolution". For example: If you use press studs and Velcro, you have two methods of fastening.

Finally a multiple costume change with six costumes from preparation and through the handling is presented with a series of 48 photos. In addition this comprehensive book contains effects which employ different methods which can be used by magicians performing all genres of magic, even close-up:

Never before has there been such an extensive treatise on the subject.

Lex Schoppi was awarded "Author of the Year 2010" by Magic Circle of Germany (Magischer Zirkel Von Deutschland) for his series of Quick Change books!