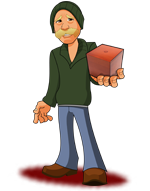 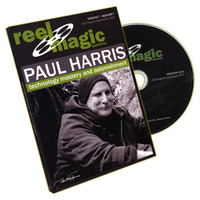 Today, when you order "Reel Magic Quarterly - Episode 1 (Paul Harris) - DVD", you'll instantly be emailed a Penguin Magic gift certificate. You can spend it on anything you like at Penguin, just like cash. Just complete your order as normal, and within seconds you'll get an email with your gift certificate.

"Try This At Home" with Garrett Thomas

Andrew Pinard's Continuum a look at those who influence magic from the past, the present, and the future - this installment is

Plus bonus material, performances, and explanations

PAUL HARRIS:!?!?! Report this review
Pro Privacy ON (login to see reviewer names) on April 4th, 2010
(This review is for Reel Magic Quarterly - Episode 1 (Paul Harris) - DVD)
This DVD has a whole interview with Paul Harris... It's AMAZING to hear what he has to say.

Not to mention, this was the VERY first real magic, the start to the revolutionary greatest deal in magic.

Garret Thomas does a fantastic interview about the fake-take and gives you tons of helpful tips, David Regal HILLARIOUSLY reviews TONS of stuff, and John Lovick, Paul Potassy and Dan Tong teach some AMAZING stuff (Dan Tong's Chop cup is worth over the price of the DVD).

How could you NOT buy this?
Did this review help you? Do you want to respond to this review?

Are you kidding me? Report this review
Verified buyer Pro Privacy ON (login to see reviewer names) on April 3rd, 2010
(This review is for Reel Magic Quarterly - Episode 1 (Paul Harris) - DVD)
An interview with Paul Harris? How could you NOT buy this. This episode is great, and worth the price twice over just for the Paul Harris interview. In the interview, you get to see a lot of Paul's excellent thinking and philosophy about magic. Honestly, I would even go as far as to say if you take the time to absorb and digest Paul's words, it may change your magic! This is also (I believe) the first video interview with Paul in a VERY long time, which makes this even more special. Seriously? This is a no-brainer. Pick this up. Now.
Did this review help you? Do you want to respond to this review?
Bestsellers