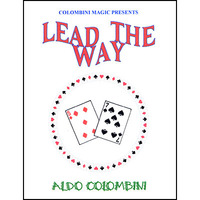 Today, when you order "Lead the Way by Wild-Colombini", you'll instantly be emailed a Penguin Magic gift certificate. You can spend it on anything you like at Penguin, just like cash. Just complete your order as normal, and within seconds you'll get an email with your gift certificate.

Lead the Way by Wild-Colombini

A great and unusual mystery.

An easy trick to do, suitable for stage too.

You show two packets of cards: Six red cards and six black. You place the packet of red cards on a stand backs to the audience and do the same with the packet of black cards on another stand. You turn over a 'leader' card in the front of each packet (a red card in front of the red packet and a black card in front of the black packet.) The packets are switched back and forth several times and the cards follow the 'leaders.' At the end all the cards are back in two packets: Red and black.