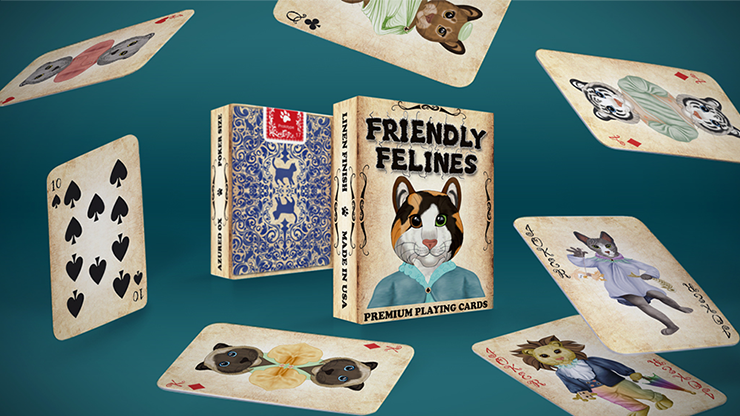 Today, when you order "Friendly Feline Playing Cards", you'll instantly be emailed a Penguin Magic gift certificate. You can spend it on anything you like at Penguin, just like cash. Just complete your order as normal, and within seconds you'll get an email with your gift certificate.

Here's an amazing deck of cards, featuring cats from all over the world. With special features for magicians!

Each set of courts represents cats from a different region. We also added in some gaffs and reveals for magic tricks. That, combined with a full bleed back design, makes this a well-rounded deck suitable for collecting, playing games, and performing magic tricks. Only 1,000 of these decks have been printed with a custom numbered seal. Designed in Europe and printed in the USA by USPCC.

Playing cards for cat lovers Report this review
Pro Privacy ON (login to see reviewer names) on April 22nd, 2018
This is a spirited and lively deck of playing cards that is cute at the same time. It has humorously and rightly been described as "the cat's meow"! The tuck box immediately introduces us to one of the cat characters that populate this deck. It also has a numbered seal (featuring a paw print), and a two of spades reveal on the inside flap.

I can't say enough good things about the borderless back design. The ornate artwork really emphasizes the two cats that are silhouetted as the key feature, and the full bleed design looks stunning in spreads and when handling. My only concern is that the style doesn't seem to entirely fit with the artwork style employed by the face of the cards, but there's no doubt that these card backs look truly spectacular.

The card faces have a vintage style appearance, that looks great and works well with the artwork, while the pips are clearly customized, and the indices are clear.

I like the fact that the Aces have been given their own identity, with heavily stylized artwork that on the one hand matches the court cards, and yet is clearly distinct from them in that they feature the great cats of the wild: Lynx, Cougar, Tiger, and Cheetah.

The Jokers add more cat characters to the mix, with a Lion (the only cat with a mane), and a Sphinx (an unuxual hairless breed).

Two extra gaff cards give possibilities for magical effects involving transformations and vanishing, with two extra Ace of Diamonds, one with an alternate cat character, and the other with a blank area where the cat character would normally be.

Once again the printer of choice is USPCC, to ensure high quality, durability, and smooth handling. Collectors will especially enjoy this deck, but the fact that it has very clear indices also ensures that this deck can also work just fine for card games or in the hands of a magician. - BoardGameGeek reviewer EndersGame
Did this review help you? Do you want to respond to this review?
Bestsellers