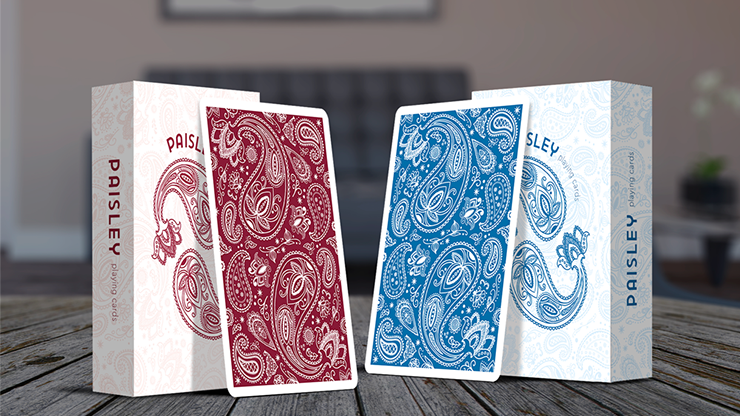 Today, when you order "Limited Edition Paisley (Ruby Red) Playing Cards by Dutch Card House Company", you'll instantly be emailed a Penguin Magic gift certificate. You can spend it on anything you like at Penguin, just like cash. Just complete your order as normal, and within seconds you'll get an email with your gift certificate.

LIMITED EDITION: Only 1000 of each color printed! Will NOT be reprinted.

This time they are back with two limited metallic editions of this elegant deck with a hidden marking system: Paisley Ruby Red and French Blue, both with metallic ink on the back and tuck! The decks are limited to only 1000 pieces each, without any reprint. They have a numbered custom tuck seal. These decks will give every performance an extra glance!

The French Blue Paisley Edition deck has a classy traditional blue look, but with a fully metallic inked back and metallic details on the tuck. The Court cards appear in their traditional designs but are merged with the color concept to create a whole, fully custom deck of cards.

The Ruby Red Paisley Edition deck will show a deep red glance with metallic ink on the back and tuck. The appearance of the classical Court cards are totally in line with the red concept style, but still recognizable for every magician's performance.

Moreover, the French Blue and Ruby Red Editions will have the same well-hidden, two-way marking system for suits and value as with the Black Paisley Deck. It is integrated into the detailed paisley back design. It is very easy to read for the trained eye and completely invisible to your audience. Included are a double backer and a duplicate face card to help you perform special effects.

As with the Black Edition, the cards will be printed on the Crushed Bicycle grade stock by the USPCC. This makes them last longer, feel incredibly soft and have an amazing snap. The remarkable Air Cushion Finish smoothens the surface, allowing beautiful spreads and fans. Moreover, the cards will be traditionally cut for easy weaving techniques and Faro shuffles.