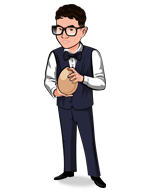 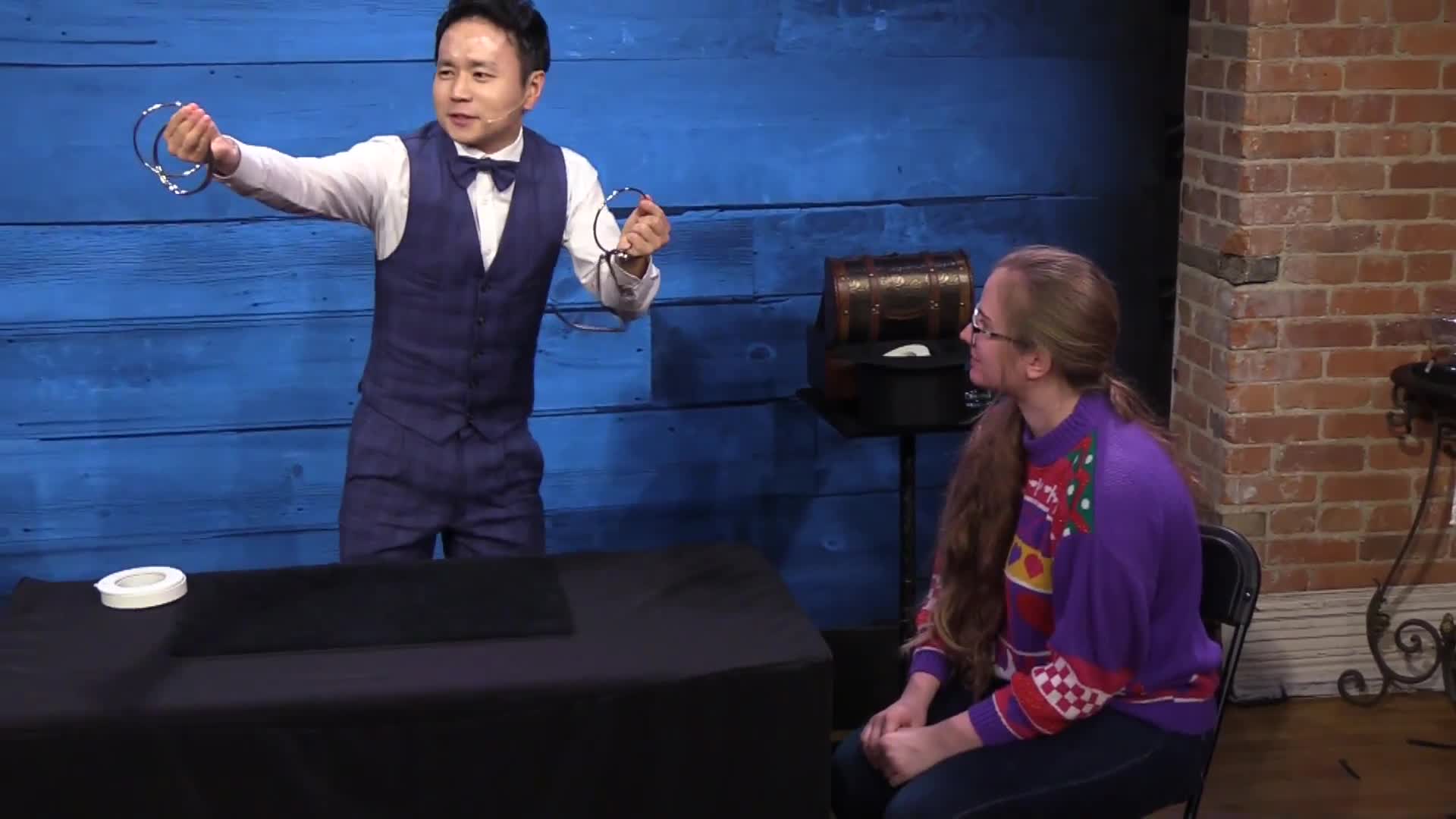 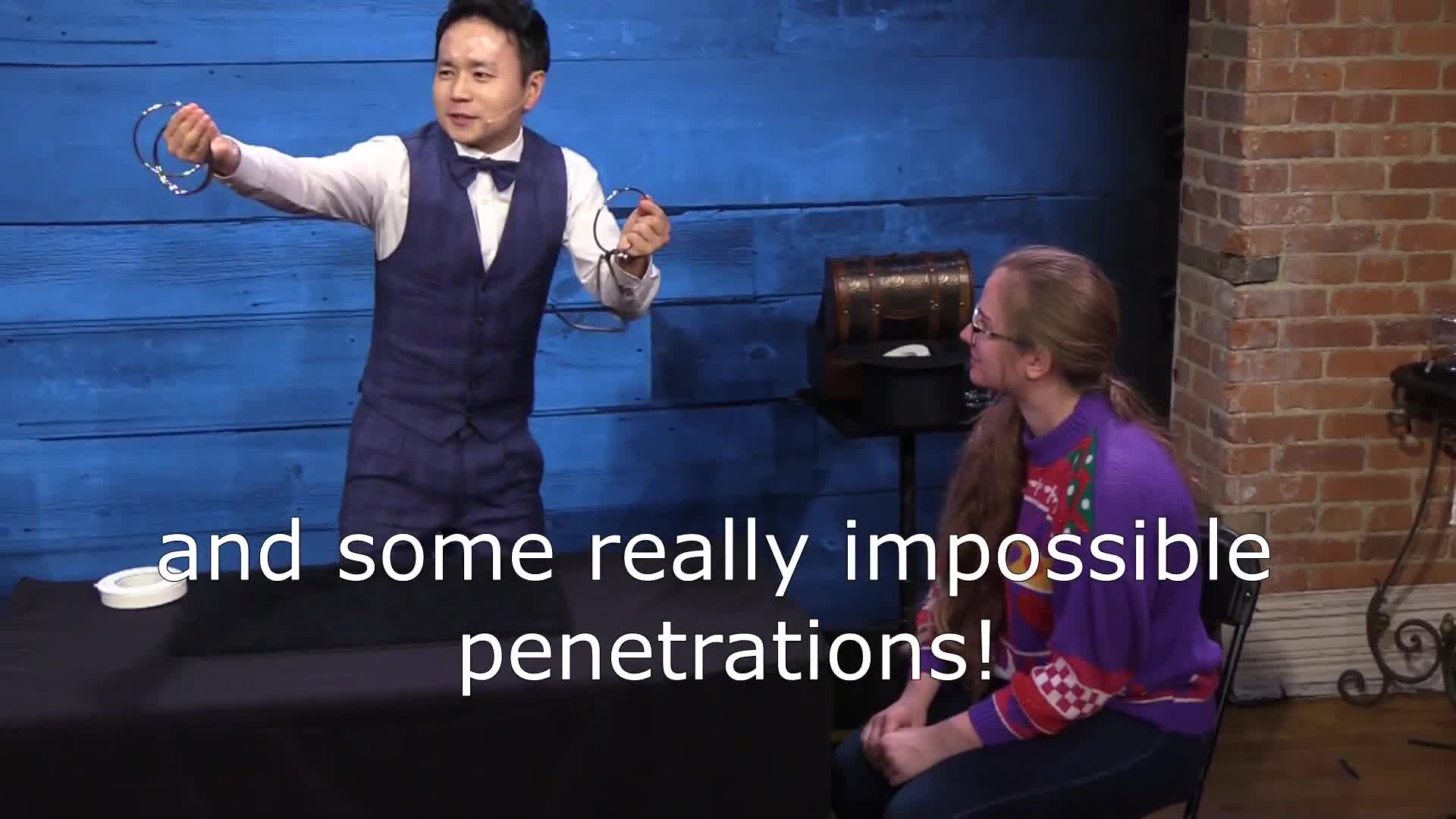 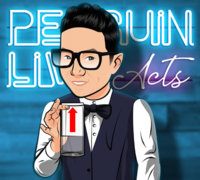 Today, when you order "Jeki Yoo LIVE ACT", you'll instantly be emailed a Penguin Magic gift certificate. You can spend it on anything you like at Penguin, just like cash. Just complete your order as normal, and within seconds you'll get an email with your gift certificate.

"Jeki Yoo has an entertaining energy and unique close up magic! I love his FISM act" -Shin Lim

4th Dimension- A red circle on a black piece of paper pops off and becomes a real ball, then back into the picture.

Rubberband Stop- The magician pulls a rubberband into a star shape and it is instantly hardened.  This makes an awesome souvenir for a spectator!

Ninja Ring-   A creative and entertaining Linking Rings routine that incorporates a finger ring and even a pair of eyeglasses.

Clap-Trap- Every time the magician claps, a card pops out of the deck. It even appears in the air.

Arrow coins-  Four coins appear impossibly from out of a playing card.

Coins thru Zipper Bag- The magician puts four coins into a transparent sandwich bag and he is able to remove them magically one by one through the plastic.

Diamond Matrix- The pips are removed from a signed card and transported to a corner of the table before they dissapear and are found back on the card. This is a beautiful routine and an excellent closer.

Jeki Yoo's magic is innovative and original, inspiring magicians and rousing applause from audiences around the globe . After winning The Busan International Magic Festival, Asia's greatest magic contest as a high school student in 2006, Jeki began taking the international contest scene by storm.  In 2009, he won the first place close-up magic award from the International Brotherhood of Magicians, the world’s largest organization of magicians. Since then, Jeki and his magic have wowed audiences in England, France, Sweden, Italy, Japan, China, and many other countries including Scotland where, as a member of SNAP, one of Korea’s biggest magic shows, he was invited to perform at the famed Edinburgh Festival. Jeki has also graced the stage of the incredibly popular hit show America’s Got Talent. Over13 million people watched him perform his own unique style of close-up magic before an impressed panel of celebrity judges. Even the infamous Simon Cowell was left stunned by what he had just witnessed.

Korea’s Dynamic Duo of Magic: In 2012, Jeki teamed up with fellow elite magician Ellie K. Park and conquered international magic contests. The popular pair performs their own unique ‘Quick Change’ act where they change outfits in a blink of an eye-right before the audience’s eyes! After working together for a year, Jeki and Ellie made an appearance on SBS’ Starking, a famous Korean TV show. They performed their ‘Quick Change’ act for20 minutes! Jeki and Ellie’s act not only scored high ratings for Starking, but also heated up the internet; making them even more widely known!

Jeki is currently headquartered in Las Vegas, Nevada where he continues to amaze audiences with his unique and delightful style of magic.

Beautiful, but not for me Report this review
Verified buyer Pro Privacy ON (login to see reviewer names) on April 12th, 2020
Jeki Yoo performs a visually beautiful routine for 18 minutes. He provides clear, but quick instructions. He provides the dimensions of the props used, so you know what to look for. You can also purchase the materials from Jeki for a nominal fee.

All of the material is suitable for parlor or stage. Most of it would work for a close up show. Be aware of your angles when performing the Cone & Ball routine. I would not use any of it for street or strolling, although Jeki uses the Coins Through Zipper Bag strolling.

Jeki’s act builds upon others’ effects with elegant sleight of hand and stunning visuals; however, not much is built and the execution is inefficient. The props used in Coins Through Zipper Bag make a lot of sense especially compared to Coins Through (Sheer) Silk. You will need to clean up after performing Jeki’s version whereas the easy to master version is instantly reset.

4th Dimension requires some basic sleight of hand and you have plenty of cover to carry out the moves. The dot jumping on and off the paper is visual. But other than the one moment of the dot popping on little has been added to Jerry Andrus’s routine.

He performs Ninja Rings well, but there was nothing new or creative about it.

Haunted Deck, Clap Trap, and Diamond Matrix are awesome together. Haunted Deck and Clap Trap will certainly require rehearsal before showing anyone soon. Diamond Matrix is perfect from the audience’s point of view. The routine could be modified for other environments and situations. That is to say there are gimmicks you could keep on you to perform it in case you don’t have a close up case to dip into. You could also take the idea and combine it with your favorite matrix routine with or without gimmicks.

All in all, Jeki Yoo has a great act that I love seeing, but it is not revolutionary nor evolutionary. For me, the juice was not worth the squeeze.
5 of 8 magicians found this helpful.
Did this review help you? 4 comments

Great Act Taught Well Report this review
Verified buyer Pro Privacy ON (login to see reviewer names) on February 6th, 2021
I was very impressed with this act. Dan Harlan does a great job hosting and Jeki is fun to watch. I read some very in-depth reviews /comments on this act breaking down trick by trick and for the most part I agree however, for the money this is a great investment. There is nothing revolutionary about these effects but if you like what you see and you don't know how it is done purchasing Jeki's act is an economical solution opposed to hunting down and purchasing these classics as one off's. Example : 4th Dimension and Cone and Ball are Jeki's takes on classics. Classics that are hard to find or expensive as solo purchases. Coin's through Bag, Jeki credits Michael Ammar, I doubt young magicians interested in this act have all of Michael Ammar's DVDs / Books. If you are interested in any of the routines i.e. Ring Routine, The Card tricks or the Classic manipulation this is a good purchase.
2 of 2 magicians found this helpful.
Did this review help you? Do you want to respond to this review?

An Amazing talent Report this review
Verified buyer Pro Privacy ON (login to see reviewer names) on June 16th, 2020
This is without a doubt one of the best penguin live lectures ever produced. Jeki shows some of his real working material one of the best openings I’ve seen in years and is super entertaining throughout. I have already started doing the opening and super love it super super super super super super love it. The ninja ring routine in my personal opinion is the best I’ve ever seen and is so well thought out and gives the routine a real ending. Jeki Has become one of my favorite performers to watch and thank you to penguin for presenting his word to us it’s truly a gift
2 of 2 magicians found this helpful.
Did this review help you? Do you want to respond to this review?

Jeki yoo lecture Report this review
Verified buyer Pro Privacy ON (login to see reviewer names) on January 30th, 2022
Amazing lecture
Something here for levels of skill.
Jeki has so much energy it lifts you up.
Great Material
Well worth the cost
0 of 1 magicians found this helpful.
Did this review help you? Do you want to respond to this review?

original tricks Report this review
Verified buyer Pro Privacy ON (login to see reviewer names) on December 14th, 2020
I had the opportunity to watch this LIVE for the first time. It's great! The routinese are very original, fooling and funny. Many thanks!
0 of 1 magicians found this helpful.
Did this review help you? Do you want to respond to this review?

its awsome. Report this review
Verified buyer Pro Privacy ON (login to see reviewer names) on June 4th, 2020
I knew he got fism winner. When i saw his act in blackpool fism, its such a great act. and including nice ideas .
In this his lecture, coin idea is so awsome. i recommend every magician. He remaked classic coin trick.
0 of 1 magicians found this helpful.
Did this review help you? Do you want to respond to this review?

my best ever Report this review
Verified buyer Pro Privacy ON (login to see reviewer names) on May 25th, 2020
Modern version of classic trick, interesting variation.

It was a wonderful experience for me when I saw his live acts in Korea and Japan. He is the most creative magician in the world.

The effect of his acts have been guaranteed by numerous audience of the world over the past few years.

If you learn his acts, practice hard, you will take the best acts in your life.

I hope you guys learning these fantastic acts.
0 of 1 magicians found this helpful.
Did this review help you? Do you want to respond to this review?

Best live act ever Report this review
Pro Privacy ON (login to see reviewer names) on April 15th, 2020
This was for me the most inspiring live act I’ve ever seen!
A lot of beautiful touches ond classics and innovative ideas and techniques! This will definetely bring you magic to the next level!
AMAZING!
Thanks for Sharif this great material jeki!
0 of 1 magicians found this helpful.
Did this review help you? Do you want to respond to this review?

Great tips Report this review
Verified buyer Pro Privacy ON (login to see reviewer names) on April 12th, 2020
Jeki takes classic techniques and makes his performance both modern and entertaining. I particularly love 4th Dimension, Coins thru Zipper Bag, and Arrow coins. Great instruction & well worth the price for me.
0 of 1 magicians found this helpful.
Did this review help you? Do you want to respond to this review?

Jeki Yoo is amazing! Report this review
Pro Privacy ON (login to see reviewer names) on March 19th, 2020
Jeki is one of the best magicians i ever saw!
i bought the 4th Dimension 5 years ago and i love it is pure magic!
i am a big fan of his work!!!!
If you want to learn real magic and if you want to experience the amazement, don´t lose this oportunity to learn from this real MASTER!
I will buy this without a doubt!
0 of 1 magicians found this helpful.
Did this review help you? Do you want to respond to this review?
Bestsellers