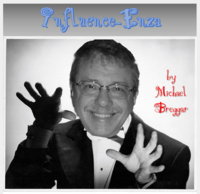 Today, when you order "INFLUENCE-ENZA By Michael Breggar", you'll instantly be emailed a Penguin Magic gift certificate. You can spend it on anything you like at Penguin, just like cash. Just complete your order as normal, and within seconds you'll get an email with your gift certificate.

You know Michael Breggar from his long-running column in The Linking Ring plus his extremely well-received books The Five Roads to Vegas, Back to the Launching Pad and Dancing With the Cards.

Now, in what we hope does not become a trend, Michael brings you the title trick from his comedy mentalism book Influence-Enza. A trick that is so amazing, so impossible and so ridiculous, you must be hypnotized if you claim to like it!

From a shuffled deck of cards, your assistant creates three piles of face-down cards in front of little signs marked 1, 2 and 3. But before any of this folderol commenced, she randomly removed a card sight unseen from the shuffled and cut deck and sealed it in an envelope safe from any sleighty hands. Free choice? Not quite. You have managed to influence your victim so that the number of red and black cards in each of the three piles exactly match what’s written inside each of the little signs! And another little sign on the table from the beginning has the name of the card sealed away in the envelope!

All is thoroughly taught in this download, including a second version by the great magician and world renown bon-vivant, Rudy Tinoco!

You will learn the approach, the psychology, the setup and method, the rationale, and if you play the video backwards, you will likely hear the voice of John Lennon saying “Cranberry Sauce”.

This download includes video instruction plus the text of the trick from Michael’s book Influence-Enza which you should immediately drop everything you are doing and go purchase it.

“By taking the ‘no sleight’ route, most effects become process heavy. Michael creates premises and presentations that take makes the ride as good as the climax. Dare to break out of the world of dreary mentalism.” – Marc DeSouza

“…. Michael always has a strong eye on powerful material. The audience is laughing like crazy one minute and speechless the next!   The bottom line is this; don’t be put off if you think this is a book of silly Mentalism “jokes.” Nothing could be further from the truth. This is strong material meant to play for real people out to have a good time and still have their socks knocked off!” - Richard Osterlind 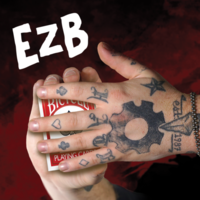