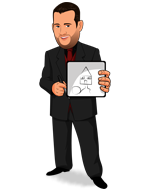 Today, when you order "The Solution by Atlas Brookings and Raven Gairloch", you'll instantly be emailed a Penguin Magic gift certificate. You can spend it on anything you like at Penguin, just like cash. Just complete your order as normal, and within seconds you'll get an email with your gift certificate.

The Solution by Atlas Brookings and Raven Gairloch (Instant Download)

The EASIEST, *Fastest* Memorized Deck... EVER!

There are some pretty cool things that you can do with a memorized deck. The only trouble is that you have to memorize 52 cards in 52 positions. Not only can that prove challenging, but it is incredibly time consuming and requires constant work to move that information from your short term to your long term memory.

Understandably, not many people make the effort.

But what if you could memorize the position of every card in a deck in a matter of minutes - And then recall that deck order for the rest of your life? This ability adds a versatility to your card repertoire that is WORTH having.

Don't think you can do it?

How is this possible? Why does this work?

Take a look at the Solution deck in the picture!

Memorized decks typically take a number of forms, and (unsurprisingly) each has some sort of compromise. A deck that requires you to memorize it through brute force takes an awful lot of time to master. A deck formed from a set of rules or a formula typically can't be freely handled or displayed as the cards don't look mixed. Systems that allow the use of memory pegs are also difficult to learn as you often have to learn the peg system as well.
In an ideal world, there wouldn't be any compromise - You'd be able to quickly memorize a deck that could also be freely displayed and handled by a participant. You'd have your cake and eat it too.

I'm pleased to say that this is now possible with 'The Solution'.

The Solution is the deck that Atlas referenced during his Penguin Live Lecture - a deck that you can memorize in minutes and openly fan and display.

The book - running to 120 pages - not only outlines the system, but also comes with several routines that have been created specifically for someone who wants to perform as a mind reader.

not easy not fast possibly effective but I'll never know Report this review
Verified buyer Pro Privacy ON (login to see reviewer names) on December 19th, 2020
The ad clearly states this is the easiest fastest mem deck ever. It simply isn't either of those things. The PDF tells a long, boring story how the idea came about followed by all of the long, harder ways to figure this system out. Next are the shortcuts. The story might be better served on a blog or a facebook post but serves little purpose, here.
Learning a memorized deck isn't easy for anyone so, some effort is expected. But to suggest you've made that process faster and then, hardy do much t achieve that goal is mind numbing to someone like me who spent hard earned money for the very thing the solution does not deliver: speed.
They did create a new system to help learn the stack but the system requires rules, some deeper knowledge and understanding of maths that not more than only a few will have. so, what has happened is, they have exchanged one set of things to know and recall for another set of things to know and recall.
I wanted to really like this but I feel cheated, again. BTW, I am not a genius but I am not a moron, either. I regret this purchase and did so based on the ad copy. it is very misleading in my view. Buyer be warned.
I honestly hope someone else reviews this with better, higher opinions than mine.
I will go back to Mnemonica Trainer by Rick Lax.

1 of 2 magicians found this helpful.
Did this review help you? Do you want to respond to this review?

Brilliant Report this review
Verified buyer Pro Privacy ON (login to see reviewer names) on June 24th, 2020
I’ve tried (well, not very hard I admit) to learn the Mnemonica stack. It is painful to say the least. The Solution is absolutely brilliant in its rule based stack that looks entirely random. No repeatable pattern, no difficult memorization (although there is some) makes this a truly outstanding stack.
1 of 2 magicians found this helpful.
Did this review help you? Do you want to respond to this review?
Bestsellers