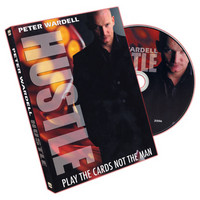 Today, when you order "Hustle by Peter Wardell", you'll instantly be emailed a Penguin Magic gift certificate. You can spend it on anything you like at Penguin, just like cash. Just complete your order as normal, and within seconds you'll get an email with your gift certificate.

PLAY THE CARDS NOT THE MAN!

FREE SHIPPING TO THE UNITED STATES.
+ Add to Cart
Review Wishlist
In stock: usually ships within 24 hours!
Order in the next 3 hours 2 minutes and it will ship TODAY!
black-friday-2020
dvd
Tweet

Hustle is a performance piece that looks at magic, fortune telling, card cheating and proposition bets. It ties these together with stories and characters, both real and imagined. Filmed in front of a live audience at a location in London, the performance gives an insight into the world of the one-man show.

For the first time, Peter's live performance has been recorded onto DVD. This is them followed in the studio with a detailed explanation of each routine.