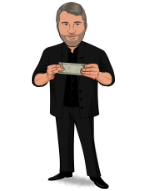 Today, when you order "JJ NOTEBOOK by JUAN PABLO & JOTA- Trick", you'll instantly be emailed a Penguin Magic gift certificate. You can spend it on anything you like at Penguin, just like cash. Just complete your order as normal, and within seconds you'll get an email with your gift certificate.

A new version of a classic with a totally different method to force any number easily and clearly.
And something else: The prediction is given by one spectator!

With this special notebook you can:

- Make a spectator freely choose a word, celebrity, place in the world or the serial number of one of their bills and match the result of the sum of numbers chosen by other different spectators.
- Steal personal data of the spectators (PIN, birthday, phone number) to use them in this routine or during your show.
- Force any small or large number in a simple and indecipherable way.

The change happens in the spectator hands without him even noticing

You don't have to do anything since the device does it by itself.

The notebook can be use as a casual one and will be ready when you need it.

It is simple, narrow and looks like a regular one.

You can reload it as many times as you want with standard post-its.

In the online tutorial we explain 4 different and original routines in where you can hit:

1. The serial number of a spectator's bill
2. The coordinates of a city in the world
3. The exact location of a word in a book (Book Test)
4. Any word chosen by a spectator (animal, card, food, etc)

You can do all this by combining words and numbers with this revolutionary device that is super easy to use!

You ask a spectator for a bill and you exchange it for a business card that you take from the notebook. Then you ask different spectators to write random numbers and finally you give the notebook to the owner of the bill to add up them. One he has done it he opens his bill himself and confirms that the result matches the serial number. Incredible but real!

Wonderful utility device Report this review
Verified buyer Pro Privacy ON (login to see reviewer names) on August 11th, 2021
I opened the package and went WTF? It looked, to be honest, like a piece of junk. I watched the instructions, and then it hit me: The fact that it looks like a cheap-a** PostIt note pad makes it all the more deceptive. No spectator will ever in a million years suspect that this is a gimmicked H***** pad. While the instructions are fairly bare bones, I immediately thought of some good uses for this utility device. It's a little on the expensive side for something homemade, but I love it. Best mentalism utility of 2021 so far!
1 of 1 magicians found this helpful.
Did this review help you? Do you want to respond to this review?

Very Cumbersome Report this review
Verified buyer Pro Privacy ON (login to see reviewer names) on August 9th, 2021
I assume if you speak Spanish, the instructions are clear. If you do not speak Spanish and I don't understand badly broken English, you will have difficulty getting through the instructions. After that, every example of the use of the JJ Notebook is very cumbersome. I won't use any of them. However, Michael Ammar in one of his lectures taught a number prediction without a gimmick. The JJ notebook gimmick will allow the Ammar performance which is easily done and clear, to be done even easier. I will use the gimmick for the Michael Ammar version. However. $40 is one expensive gimmick for Ammar's version.
1 of 2 magicians found this helpful.
Did this review help you? 1 comment

PLEASED WITH JJ Report this review
Verified buyer Pro Privacy ON (login to see reviewer names) on August 27th, 2021
I bought the JJ notebook about a month ago after watching Nique Tan’s review and consider it to be a good purchase. I have the Super Mento Pad, too, which is a great product but the JJ has beneficial features that make it good for carry-around. It is very thin and the use of the PostIt pad makes it look unassuming and unsuspicious. The locked/unlocked dual system does indeed make it possible for the critical actions to take place in the hands of the participant(s). A couple things for folks to note. First, this is more than an Add-A-Number pad. That is its primary purpose but it also functions as a clever switching mechanism for currency or billets. Second, all of the routines detailed on the supporting video are good and worth learning. If you are unfamiliar with the Add-A-Number process, though, it traditionally requires four participants. I say this not because it is a negative for the notebook, just that it is a reality of presentation. I’ve been trying to think of ways to use the JJ in presentation to just one person (again, because the thin pad lends itself so well to easy carrying in walk-around environments). To reiterate: I am pleased with the JJ notebook – it is a simple-to-use but clever device.
Did this review help you? Do you want to respond to this review?
Bestsellers