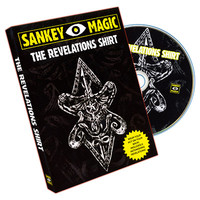 Today, when you order "Revelations (EXTRA LARGE, With DVD) by Jay Sankey", you'll instantly be emailed a Penguin Magic gift certificate. You can spend it on anything you like at Penguin, just like cash. Just complete your order as normal, and within seconds you'll get an email with your gift certificate.

The Revelations Shirt looks just like a very cool black t-shirt with a few hip, understated designs, but hidden in the graphics of the shirt are SEVEN incredible revelations including three different selected cards, the date on a borrowed coin, a classic mathematical force, and even two different ESP symbols! Perfect for both magicians and mentalists, the Revelations Shirt is the ultimate secret weapon!

A card is selected and the spectator shows it to her friends. (It's the Ace of Diamonds! Shhh!) The magician draws attention to the intricate pattern on his hip black t-shirt and mentions that the pattern is "a combination of a Rorschach inkblot and a crystal ball." The audience is skeptical, but the magician asks everyone to stare at the pattern and concentrate on the image of the selected card. "Do you see it on my shirt?" he asks. When everyone admits they don't, the magician offers to "make it a little easier to see" and with a single fold of the shirt the image of A SINGLE LARGE DIAMOND suddenly appears!

Everyone is still freaking out over the appearance of the Ace of Diamonds shape when the magician suggests, "Let's try it again." This time someone only PEEKS at a card (it's the Two of Hearts) and holds the pack in their own hands. Once again the performer asks the spectator to concentrate on the card they have in mind and focus on the front of the black t-shirt. And again, with just a single quick fold of the shirt TWO LARGE HEARTS appear!

Now everyone REALLY loses it!

A card is selected and the magician says, "If I don't find your card, I'll give you the shirt off my back, okay? Don't get too excited ladies. And just so you know, the shirt is 100% cotton, not polyester, so it's quite a prize." But when the magician executes a fancy flourish and turns over the top card, it's NOT the selected card. He tries again, but again fails to find the card the spectator has in mind. "Well, I DID say if I failed to find your card I'd give you the shirt off my back. And like I said, it's 100% cotton. Just take a look at the label." The performer rolls back the collar of the shirt and pulls out the tag and everyone sees a large image of the selected card PRINTED ON THE LABEL!

The date of a borrowed coin magically appears on the front of the shirt!

Or you can have four cards selected and they turn out to be an Ace, a 9, an 8 and a 6...all perfectly matching the 1986 date ON THE FRONT OF THE SHIRT!

The wonder worker admits to having "some psychic abilities" and suggests a test. He asks a spectator to think of ANY 3-digit number and write it down on a business card or cocktail napkin. (And it really is a free choice!) The performer turns his back on the audience to make sure he can't 'get a peek' and instructs the spectator to carry out a few simple calculations with the freely selected number. When the spectator arrives at a final total everybody suddenly notices that the exact same number is PRINTED ON THE BACK OF THE MAGICIAN'S T-SHIRT!

Using a collection of ESP symbol cards printed on the back of the Revelations Shirt, Max Maven's classic 'Finger Chart Force' is taken to a whole NEW LEVEL OF AMAZEMENT! Watch the video preview to see this mind-bender in action!

Jay experimented for a long time trying to figure out a way to REPEAT the "Finger Chart Force" and arrive at a DIFFERENT symbol - and Jay figured it out! This repeat demonstration is the ultimate psychic convincer!

Inspired by the Dieselâ ¢ brand of hip, high-end casual clothing, each Revelations Shirt is manufactured from 100% pure ultra cotton and the graphics are printed with a "soft white" ink to give the shirt a hip, pre-washed and 'worn-in' look. And the intricate design on the front of the shirt features a very subtle combination of arrows, snakes, stars and hieroglyphics for a very cool design that is both universal and timeless.

ORDER THE RIGHT SIZE FOR YOU!

The Revelations Shirt is available only in black and in small, medium, large and X-large sizes. To make sure you have enough room to easily fold the front of the shirt, please order a size that is 1 size larger than the size you usually wear. For example, Jay is a small guy (5" 5' and 155 lbs) and he usually wears a LARGE Revelations Shirt.

Along with the complete details on all 7 mind-blowing revelations, the full-length DVD also explores such questions as, "Is it better to reveal the hidden symbols slowly or quickly?" And, "With mathematical forces is it better to involve a calculator or just use pen and paper?"

Jay also shares a ton of subtle psychological pointers learned over countless performances with the Revelations Shirt in the real world.

The Revelations Shirt! Perform just one or two of the revelations and completely freak people out or perform several of them together and START YOUR OWN RELIGION!

Wear your act on your back!

Whether you perform magic, mentalism or both, The Revelations Shirt is a perfect addition to your act! Comes complete with specially printed shirt, tag, and exciting instructional DVD featuring a powerful collection of Jay's favorite single and multiple card forces!

Nearly Perfect Report this review
Verified buyer Pro Privacy ON (login to see reviewer names) on January 13th, 2015
For one I like prediction illusions and this is perfect for one,two or three revelations at a time when you walk around. But I have to agree with the comment above about the maths angle. Don't get me wrong it is all in the presentation which is how it should be. My only negative comment if you could call it that is that I wish there had been more predictions in the shirt. I know some people might get upset and argue about overload in a product but could you imagine what this would have been like if somehow you could add to the product in some way..like multiple change of tags etc. I am one who like many outcomes and yes I take on board what others may say but what would something like this be like with 15 or so predictions built in ...this would have been sensational and you wouldn't have to worry about doing it twice to some because you have many to get through before you start at the beginning again . Anyway this is still a great product and if memory serves me I think I have purchased two...just in case. The door is open to others to add to this way of predictions in clothing etc.
Did this review help you? Do you want to respond to this review?

Great Idea Report this review
Verified buyer Pro Privacy ON (login to see reviewer names) on March 22nd, 2014
I ordered the Revelations shirt specifically for a walk-around show I did recently for about 500 people. I wore a tux jacket and pants and this shirt. (Needed the jacket for "sleeving". I'm not not a fan of math-magic (you know, pick a number, reverse it, subtract, etc. and that's why the 4 stars. But you can use the 1089 on the back to reveal cards that were "picked" (like 10, 8 & 9), which is what I'll do.

This is a forcing shirt, so it's all in the presentation. The tag on the shirt is outstanding and I must say, I was blown away by the the impact this had on my audience.

Lastly, it's just damn cool to own! Wear it, and you'll always be ready to perform. Also, PLEASE watch the video, as Jay's performance tips WILL make ALL the difference. I wasn't sure at first, but he's right. Side note: I also got his "In A Flash"... reputation maker... like stage magic in your hands! ENJOY

Harry Petaccio
Did this review help you? Do you want to respond to this review?
Bestsellers