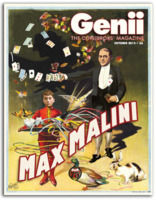 Today, when you order "Genii Magazine: October 2012", you'll instantly be emailed a Penguin Magic gift certificate. You can spend it on anything you like at Penguin, just like cash. Just complete your order as normal, and within seconds you'll get an email with your gift certificate.

The oldest and most respected magic magazine on the planet. This month's feature is the legend, Max Malini. START READING INSTANTLY PLUS GET A MIGUEL ANGEL GEA COIN MIRACLE.

Unreal by Bruce Bernstein
The Show Doctor by Jeff McBride
The Nine of Diamonds by Mark Beecham and Neil Stirton
The FFFF Book by Obie OBrien, et al.

Really good trick Report this review
Verified buyer Pro Privacy ON (login to see reviewer names) on October 27th, 2012
its an amazing trick which takes almost no pratice and will 100% sure amaze people i love it. and i think u should buy at RIGHT now
4 of 5 magicians found this helpful.
Did this review help you? Do you want to respond to this review?

genii magazine:october 2012 Report this review
Verified buyer Pro Privacy ON (login to see reviewer names) on February 3rd, 2016
great edition
Did this review help you? Do you want to respond to this review?

Ads ads ads Report this review
Verified buyer Pro Privacy ON (login to see reviewer names) on June 3rd, 2013
For years I have seen descriptions of tricks and read that they first appeared in Genii, so I was looking forward to seeing the magazine. I was disappointed. It contained only one trick (a good one, admittedly). There was a good article about Max Malini, but all the rest was ads.

Not worth the money.
Did this review help you? Do you want to respond to this review?

Staying In The Know Report this review
Verified buyer Pro Privacy ON (login to see reviewer names) on November 14th, 2012
You can't do much better than Genii Magazine. It's a great way to stay up to date with what is happening in the world of magic. Of course there are always some great little gems of magic included in every issue too. You just can't beat this for value. And now you get some really great magic taught on a video download. Awesome. This month included a very clever coin effect by Miguel Angel Gea called "Coin Thru". A great version of coin thru glass and coin thru table with no gimmicks and only one coin. Also for you just starting out in coin magic this effect uses minimal sleight of hand instead using subtleties and direction to fool the eye and the mind. Very nice. You just can't go wrong with Genii. Make a wish a wish today. ;)
Did this review help you? Do you want to respond to this review?

Nice coin routine Report this review
Verified buyer Pro Privacy ON (login to see reviewer names) on November 3rd, 2012
The additional routine is fairly easy to do,
but requires some basic coin manipulation
skills.
Did this review help you? Do you want to respond to this review?
Bestsellers