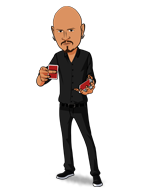 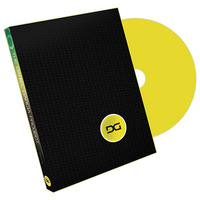 Today, when you order "Daniel Garcia Project Vol. 6 by Daniel Garcia", you'll instantly be emailed a Penguin Magic gift certificate. You can spend it on anything you like at Penguin, just like cash. Just complete your order as normal, and within seconds you'll get an email with your gift certificate.

In 2005, Daniel Garcia started production on a 3 volume DVD set that what was soon to become an instant classic among the magic community. With highly visual effects, and off the wall techniques, The Daniel Garcia Projects became a must-have for a new generation of magicians as well as seasoned professionals. Now, with the help of Paul Harris and the Buck Twins, Garcia has signed off on the final chapters of his new set. Welcome to the much anticipated release of - The Daniel Garcia Projects volumes 4, 5, and 6.

V.I.S.A - Visual Instant Static Attraction. Instantly cause the magnetic strips on two credit cards to ACTUALLY become magnetized, attracting and repelling each other.

One Point Production 2.0 - An extremely visual production of a single card that can be performed all in-the-hands!

Pop - Magically cause a signed playing card to appear INSIDE of a balloon that the spectator has inflated and is holding.

Ham and Cheese 2.0 - A revamped version of Daniel Garcia's classic effect "White or Wheat" all done in the spectators hands! Magically cause a signed card to appear between two jokers INSTANTLY and VISUALLY.

Static Sandwich - A magical combination of "V.I.S.A" and "Ham and Cheese 2.0" where a selected card visually flies out of the deck and is caught between the two jokers as if attracted my a magnetic force.

On The Rocks - One of the most visual coin through glass effects you will ever learn with NO EXTRA coins!

Tric-Tac - Visually change the color of every single Tic-Tac in the container and IMMEDIATELY let the spectator examine everything.

iATM - Included on this DVD is the bonus files to magically pull money out of your iPhone. NO APP NEEDED

Overpriced Report this review
Verified buyer Pro Privacy ON (login to see reviewer names) on October 4th, 2016
I originally purchased this for "POP". I needed a good signed card in balloon Magic trick to go with one of the other magic tricks I do in my performance. The reason I gave this 3 stars is because I thought I was getting 10 different tricks. In reality what you get is

"1 Point Production 2.0"
A useful card handling technique. The explanation on how to perform this technique is vague at best. Once you finally figure out what he's doing, this trick is difficult to master. However, after you are able to perform this move seamlessly, it is useful in many different situations.

"Pop"
This is a pretty good signed card in balloon trick in which you use the move from "1 Point production 2.0" to complete the trick

"Vortex"
This is just one of the handling's for "1 point production 2.0" and should not have been listed as a separate trick)

"Ham and cheese 2.0"
Yet another handling fot "1 point Production 2.0" and should not have been listed as a separate trick

"Static sandwich"
This is exactly as it is described in the listing. It is a combination of "Visa" (which I think is a worthless trick) and "Ham and cheese"

"On the rocks"
This is a coin through glass trick that you can find for free all over YouTube under a different name. If you've been around magic more than 6 months you already know how this trick is performed. I hate it when I pay money for a trick that I already know how to do or that I can get for free somewhere else.

"Trick tack"
This trick is decent. However, if the company that makes Tic Tacs ever changes the label on the front of their Tic Tac container you will not be able to perform this trick. I have purchased many tricks in the past where are you receive a gimmick of a company's product. The magic trick usually works great until the company decides to change their label. Let's face it people, companies are constantly changing the appearance of their products so that they can stay up with current trends. I can assure you eventually you will not be able to perform this magic trick unless you recreate the gimmick yourself.

"iATM"
This is a good trick that will allow you to pull money out of your phone. This truck is almost impromptu and has virtually no setup. However, this does require the use of a smartphone. Smartphones are changing at a very rapid rate these days and there is no guarantee that this trick will always work on all models of phones in the future.

"The okay coin vanish"
This is a fun coin vanish trick that can be done at any time. However, it is angle sensitive. This trick is designed to be seen standing face-to-face with someone if there are people standing to the side, your trick will be revealed.

When I purchased this I thought I was paying for 10 different magic tricks. When in reality I was only getting 5 (one of them is useless and one of them every magician already knows) so I guess you could say I paid $35 for 3 sleight of hand magic tricks. If it would have been $15 I would have given it 5 stars.
1 of 2 magicians found this helpful.
Did this review help you? Do you want to respond to this review?
Bestsellers