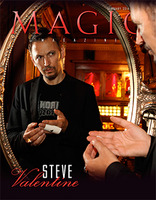 Today, when you order "MAGIC Magazine: February 2014 ISSUE", you'll instantly be emailed a Penguin Magic gift certificate. You can spend it on anything you like at Penguin, just like cash. Just complete your order as normal, and within seconds you'll get an email with your gift certificate.

FREE SHIPPING TO THE UNITED STATES.
+ Add to Cart
Review Wishlist
Out of stock.
magazine
Tweet

Steve Valentine: His Magic, His Mentors, and His Rediscovery of the Real Secrets of Magic By Chris Philpott

Here are two impromptu variations of a classic effect, adapted by Steve Valentine from the work of past masters of magic Paul Rosini and Edward Victor.

The Most Watched Magic Event in History By Rory Johnston

Twenty-five years ago, Dan Witkowski presented a halftime show that may have changed the way such Super Bowl events have been done ever since. He did it with innovation, nerve, and magic.

Paul Gleeson, Behind the Scenes By Jamie D. Grant

Paul Gleeson, known onstage as Rua, is one of the latest magicians to have his own television series — and he is the first and only magician to do so in Ireland, presented entirely in the Irish language.

He was one of the most unusual secrets in magic, the truly baffling star of an illusion that is still whispered about today. Sideshow performer Johnny Eck was also a magician in his own right, a painter, and so much more â€” while being so much less.

Stephen Minch writes: "If you live in the Tacoma-Seattle area of Washington, or if you keep your fingers pressed firmly to the pulse of card magic barely overground, you know who Steve Mayhew is, and you will be excited to learn that, after more than ten years of intense and unceasing labor, a slender volume of nearly all his magic is being released. Steve Mayhew is, without question, the greatest exponent and innovator of card magic to have lived since J.N. Hofzinser. Now, I'm delighted to say, thanks to the long labors of John Lovick, we submit the following [three effects] in evidence."

A grand illusion is on offer this month in "Loving Mentalism." It's an illusion in which a cow transforms into a horse right before a spectator's eyes! Well, maybe "grand illusion" is taking things a little too far. It's all done with a simple card containing a few questions, and the illusion only takes place in the spectator's mind rather than on a Las Vegas stage. Nonetheless, it's a simple and deceptive little mystery that shows you're a master of persuasion and mind manipulation.

This routine uses two ideas from Billy McComb. You invite a helper onstage, then show five different cards, each printed with a different-colored mitten. After you place the five cards aside, you ask your helper to turn around. Then you show the audience an envelope with a window cut out. The envelope contains a single card. You explain to the audience that the card is your prediction, and show a picture of a red mitten that your helper needs to match. Next, you take the prediction card out of the envelope and place it aside, face down. You spread the stack of face-down cards in front of your helper and ask her to choose a card that she thinks will match the prediction you showed earlier. She turns over her card to show a yellow mitten! You act disappointed. You say "Sorry, it's not a match" as you turn over the prediction card to reveal — a yellow mitten! Your helper did get it right! But what happened to the red mitten? As you turn around to look for it, a cutout of a red mitten is stuck on your backside!

"It's Fun to be Fooled — It's More Fun to Know." To the magicians it must have felt like a tsunami. One moment everything was fine, and then suddenly you couldn't turn around without having the secret to a magic trick rubbed in your face. Over 1,200 daily newspapers ran black-and-white comics that used magic principles as a way to sell nicotine. On Sundays, the ads got even bigger and appeared in full color. The most popular magazines of the day all carried Camel ads that exposed our precious secrets to the masses. Not surprisingly, the response from the magic world was immediate and decisive.

For What It's Worth By Mark Kornhauser
My Fake Love

A long time ago, Chipper Lowell and I were in a show together in Lake Tahoe and we noticed how audiences always fall for the fake "poignant moment." Entertainers easily recognize this artificial plea for sympathy and roll their eyes at the obvious ruse. Most everyone else, however, gets out the Kleenex. We thought, If it's that easy to create poignancy, then why shouldn't we incorporate it in an equally fake way? As it turned out, blatantly insincere as we were, our "poignant" moments were often taken at face value.

Back in 2004, during my final year at university, I produced a one-man show in the Melbourne Fringe Festival. I had been learning magic for four years at that point and wanted to unleash my brilliance on the world. If you've ever been involved in a Fringe Festival, you will know that they can be harsh mistresses. The efforts involved in producing your own one-hour show are pretty intimidating, particularly for a first-timer.