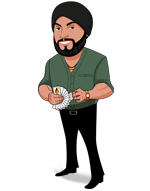 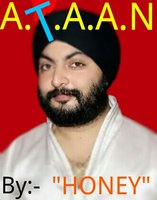 Today, when you order "A.T.A.A.N by HONEY (Jasmit)", you'll instantly be emailed a Penguin Magic gift certificate. You can spend it on anything you like at Penguin, just like cash. Just complete your order as normal, and within seconds you'll get an email with your gift certificate.

Any "THING" at Any Number

A.T.A.A.N is one of the most amazing techniques, to achieve the cleanest "HANDSOFF" version of ANY "THING" AT ANY NUMBER.

This is a very versatile version of "ANY CARD AT ANY NUMBER". And it's my very small contribution for the never ending search of "Holy Grail Of Card Magic"

From the creator of "HONEY-HULD" & "BEYOND SENSES".

#USE YOUR OWN VISITING CARDS.

# Spectators can shuffle the packs, as much as they like.

Excellent concept Report this review
Verified buyer Pro Privacy ON (login to see reviewer names) on August 14th, 2014
I do like the idea of this effect. The method is very bold and I love the way the magic happens its always best in the spectators hands. I agree this routine may be difficult to perform here in the states but with some minor tweaking and a bit of guidance from you as the magician I feel it could be performed nicely. It would have been a 5 star trick but:
I took one star off due to length of the routine, and 1 star off due to the specific move neededing to be worked round
1 of 2 magicians found this helpful.
Did this review help you? 2 comments

Nicely explained. Report this review
Pro Privacy ON (login to see reviewer names) on August 8th, 2014
Great effect. Nicely explained. Awesome Idea.I read one review here questioning about a western problem. I"ll suggest you, to view the explanation video again and specially from 11:50 to 13:12 minutes. I am sure you will fine your answer there.
1 of 2 magicians found this helpful.
Did this review help you? 3 comments

Good but... Report this review
Verified buyer Pro Privacy ON (login to see reviewer names) on August 6th, 2014
Very nice idea ! The spectator is really mixing the cards. This looks like a very direct acaan type effect... but for western people there might be a problem. I am thinking of some ways to come accross that point. Overall a very great idea, just need to think of a better way to do it for western people.
0 of 1 magicians found this helpful.
Did this review help you? 1 comment

WOW Report this review
Pro Privacy ON (login to see reviewer names) on August 6th, 2014
Amazing effect. He fooled me again.
0 of 1 magicians found this helpful.
Did this review help you? 3 comments

Mind blowing principle Report this review
Pro Privacy ON (login to see reviewer names) on August 4th, 2014
About two months i got the golden chance to see Mr. Honey performing Ataan live in a local club and the croud gone crazy like anything. I am happy that he is revealing his secret,so that every one can enjoy ataan. Don't think, buy it, you will never be disappointed.
0 of 1 magicians found this helpful.
Did this review help you? 2 comments

Brilliant concept Report this review
Pro Privacy ON (login to see reviewer names) on August 4th, 2014
Jasmit showed me this long time back and it fooled me badly, for 19$ its a steal, dont miss this guys .THIS IS BRILLIANT.

Deepak
0 of 1 magicians found this helpful.
Did this review help you? 1 comment
Bestsellers