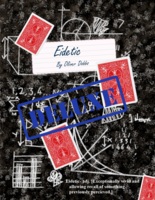 Today, when you order "Eidetic", you'll instantly be emailed a Penguin Magic gift certificate. You can spend it on anything you like at Penguin, just like cash. Just complete your order as normal, and within seconds you'll get an email with your gift certificate.

The participant is asked to shuffle the deck as much as possible and stop whenever they like and then to keep hold of the deck. Once this is done they are asked to slowly deal the cards out from the top, face up on the table so that the pack can be memorized. When the whole deck has been dealt the participant gathers the cards back up again and holds on to them. The performer explains a little bit about himself and his own unusual experiences of memory work.

Now the participant is asked to name any number between 1 and 52, and they say (In this case) 24. The performer thinks for a while before saying out loud, “24… Three of hearts”. The participant is asked to deal the cards off, again face up, to the twenty third card and then stop. They do this and the performer says loudly again “24th card… Three of hearts”. The 24th card is then turned over to reveal that it is, in fact, the three of hearts!

After the applause has died down the performer explains that these skills are not something unique to him and that it is a potential that we all possess. We just need to be confident that we have the power to unlock it. He tells the participant that they too have memorized the deck and that somewhere in the back of their mind is the potential to create something marvelous.

They are asked to loudly call out; once again, any number between one and fifty two. They, in this case, pick 36. They are now asked to think of a number and the performer reads this from their mind with no props, no questioning and no ‘imagination exercises’ of any kind. He tells this card to the participant and asks if that is the card that they were thinking of and it is correct (In this case we will say that it’s the seven of clubs)! The performer then tells them to, again, deal down to the 36th card (As they chose) face up and stop just before they turn it over. They get to the card and the performer says, “wouldn’t it be wonderful if right now you had made a miracle happen? Wouldn’t it be fantastic if the 36th card that you chose was, in fact, the seven of clubs?” The participant now turns over the 36th card to reveal that they were exactly right and have performed something incredible.

"Hi Oliver. Just wanted to let you know how pleased I am with the recent purchase of Eidetic. I've always been a bit scared to take on this kind of effect due to the memory work involved. Your take on this has made this not only possible, but fun to perform such a strong, and believable effect. Gimmickless, clean and unfathomable. Great work. I look forward to your next release." - Jay Rollins