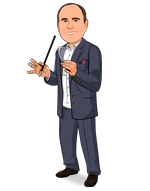 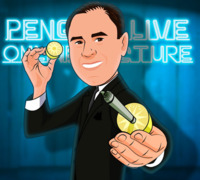 Today, when you order "Nick Einhorn LIVE", you'll instantly be emailed a Penguin Magic gift certificate. You can spend it on anything you like at Penguin, just like cash. Just complete your order as normal, and within seconds you'll get an email with your gift certificate.

Nick teaches us the real gems from his close-up, parlour and stage magic routines that have taken him all over the world! SUPPORT LIVE MAGIC. DOWNLOAD THE FULL LECTURE!

"Nick Einhorn is one of busiest pros in the business. He exudes class and always leaves his audiences amazed, amused and in awe with his ingenious methods with hard hitting and entertaining effects." - Marvin Berglas

"Nick is one of the best. His thinking is always brilliant and his material is utterly dependable and real world." - Andy Nyman

"Yes, he is a good friend, but Nicholas is also one of the most creative magicians I know. I don't brainstorm with many people, but he is someone whose advice I will always seek out and, invariably, go with.” - Jon Allen

Double Triple Prediction This chair prediction style routine is a whole act in itself! Nick will be discussing his stage version and a close-up version which both use devious but different methods.

The Three Levels of Creativity How can we learn to be more creative? Nick will explain three distinct levels of creativity and discuss how they can be applied to help you become a more creative magician.

Dragon Cups A safe, fun, impromptu and cost effective variation on the SPIKED! trick which has claimed the hands of so many magicians.

Observation Test A mind-blowing card trick which is strong enough to end your close-up set.

Pro Flite Nick’s performance and explanation for his version of the classic Ring Flight. Including Ring on String handlings.

Nest of Wallets Nick’s performance and explanation for his top selling Deluxe Nest of Wallets. A variety of routines and handling are discussed.

Supersized Swami Recreate your favourite Thumb Writer effects for a finish that the whole audience can read!

Martini Deck A Stranger Card routine performed under the fairest conditions. An easy-to-construct fake deck which you can make in minutes.

Magic Time! Who says that self working card tricks have to be boring? This is a great ‘powerhouse’ routine to keep up your sleeve for the right moment.

Paper to Money Pop this little gimmick in your pocket and be ready to perform a quick miracle anytime.

Linking Finger Rings A devastatingly baffling handling of this classic stage piece which is explained in full. Perfect for theatre shows.

Nick has been a busy full time professional magician for over 20 years. His close-up and cabaret shows are in constant demand at corporate events and private parties. Nick Einhorn is a Gold Star member of The Inner Magic Circle. He was a winner on ITV1's Penn & Teller: FOOL US! He was voted "The Magic Circle Centenary Close-up Magician" in 2005, which was part of a special event to celebrate the society's 100th birthday. In addition, he won 2nd place (Micro Magic) at F.I.S.M, The World Championships of Magic, 2003 and has won the coveted title of "The Magic Circle Close-up Magician of the Year" twice. (1996 & 2002).

He has made multiple TV appearances worldwide and is the author of many magic titles including The Art of Magic & Sleight of Hand, How To Do Magic, Close-up Magic, The Encyclopedia of Magic, Card Magic, Magic Illusions, Conjuring Tricks, Amazing Puzzles & Stunning Stunts, The Illustrated Compendium of Magic Tricks and Stunning Stunts, Stand-up Magic and Stage Illusions . A staggering quantity of over 1 million copies continue to sell worldwide.

As a consultant and magic advisor, Nicholas has created the illusions and special effects for several large stage and screen productions. He has also lectured extensively internationally and many of his creations have become top sellers. Items such as Spooked - The Ultimate Haunted Deck, Pro-Flite, The Deluxe Nest of Wallets, InFlight Self Levitation, Word in a Million are considered A-list material for many working professionals.

One of the best I've seen Report this review
Pro Privacy ON (login to see reviewer names) on April 22nd, 2016
Nick Einhorn has written easy going Magic books and I was waiting that this was lesson for beginners. But no, these are real magic and he tells awesome tricks you can use everywhere. Well, some of these are so easy that a beginner can do those and look almost professional. The presentation is fine as well. I could easily pay twice the price.
3 of 3 magicians found this helpful.
Did this review help you? Do you want to respond to this review?

Absolutely fine working material from a fine working man. Report this review
Pro Privacy ON (login to see reviewer names) on January 31st, 2016
I have many penguin live lectures, but this one particular one is the only one I've re-watched more than five times. There is something about his material that many magicians I believe will over look just how beautiful and powerful it really it.

Everything from his starting routine with the triple prediction, (which I've already added to my act), to a simple but powerful bill switch that can be immediately handed out.

You get to learn the workings behind some of his "gimmicked" material, which you will have to purchase, but it's great because you also learn how it works, and then can judge whether or not it is a good fit for your routine.

Beautiful work Nick, thank you.
3 of 3 magicians found this helpful.
Did this review help you? Do you want to respond to this review?

Learn from one of the best. Report this review
Verified buyer Pro Privacy ON (login to see reviewer names) on April 16th, 2020
Before my review, I wanted to point out that they ran out of time and the Mysterious Case of the Missing Dollar Bill is not covered in the lecture (but it is still in the list posted here.) That said, Nick could not have done justice to this effect in the little time he had. However, there is an inexpensive download on Penguin for the Mysterious Case of the Missing Dollar Bill.

Einhorn takes some of the basic and combines them in a way that defines the word synergy. For table hoppers, because of Nick's extensive experience in this area will have you with great effects that are reset by the time you leave the table.

There is only a little overlap between this lecture and his At the Table Lecture which is also available on Penguin. Both should be in your download library as practitioners of our mystical art.

2 of 2 magicians found this helpful.
Did this review help you? Do you want to respond to this review?

Worth much more! Report this review
Verified buyer Pro Privacy ON (login to see reviewer names) on February 22nd, 2016
This is by far, one of the best magic purchases I have made, to date!
There are several effects on this download that are EACH worth the cost of the download. Mr. Einhorn provides enough information here, for any close up magician to build an entire set from.

I have yet to be disappointed in Nick Einhorns products, and this purchase is no different.

Thank you Nicholas Einhorn for making this available!
2 of 2 magicians found this helpful.
Did this review help you? Do you want to respond to this review?

Great Lecture Report this review
Verified buyer Pro Privacy ON (login to see reviewer names) on January 1st, 2016
One of those lectures with awesome material. Strong magic, only worker material. Easy to do, no crazy handling, entertaining routines, high impact magic - that´s all you can ask for. There are gimmicks involved in some of the tricks. Some of them you will need to buy, others you can do yourself. But in this case it is well worth the extra dollar or the effort to construct the gimmick.

High Qualtity - can´t recommend that enough !!
2 of 2 magicians found this helpful.
Did this review help you? Do you want to respond to this review?

I don't often write reviews...but Report this review
Verified buyer Pro Privacy ON (login to see reviewer names) on October 6th, 2015
This lecture was excellent. I own a lot of these Penguin lectures (which are absolutely fantastic) and this was the first one I actually got to catch live. Mr. Einhorn was incredible, there were at least 4 things I could see myself using, and one I've already used to great success in front of my family! And that was only the first time watching! His knowledge and insight into each effect was clearly articulated, and his ideas about creativity really got me thinking. Overall, it was a fantastic lecture, one of my favorites!
2 of 3 magicians found this helpful.
Did this review help you? Do you want to respond to this review?

Nick's Nuggetts! Report this review
Verified buyer Pro Privacy ON (login to see reviewer names) on February 3rd, 2017
A really good lecture crammed with everyday useable magic. Well worth the money.
1 of 1 magicians found this helpful.
Did this review help you? Do you want to respond to this review?

meh Report this review
Verified buyer Pro Privacy ON (login to see reviewer names) on November 9th, 2016
Love the guy, love his products but the lecture just didnt do it for me... matrix dice was cool and i like his presentaion/explanation for the linking rings but the rest of the tricks were just not strong enuff...
1 of 2 magicians found this helpful.
Did this review help you? Do you want to respond to this review?

Generous teacher Report this review
Verified buyer Pro Privacy ON (login to see reviewer names) on November 3rd, 2021
Loved this lecture. Nick Einhorn packed his talk with a LOT of great material. His discussions on the Nest of Wallets and his brilliantly thought out bill change are alone worth the price of this download. On top of that he's a skilled teacher and charming presenter. His material is varied and his additions to established routines (e.g., bill change) are solid and really work to make the tricks better and easier to perform. I'm looking forward to performing these.
Did this review help you? Do you want to respond to this review?

Brilliant Report this review
Verified buyer Pro Privacy ON (login to see reviewer names) on October 16th, 2021
A lot of really great practical hard-hitting effects. Most suitable for walk-around. Really good.
Did this review help you? Do you want to respond to this review?
Load more reviews
Bestsellers