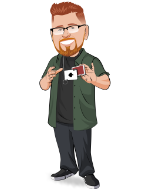 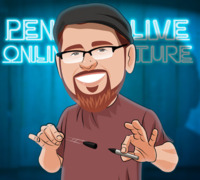 Today, when you order "Nicholas Lawrence LIVE", you'll instantly be emailed a Penguin Magic gift certificate. You can spend it on anything you like at Penguin, just like cash. Just complete your order as normal, and within seconds you'll get an email with your gift certificate.

"Nicholas empowers you with the tools needed for some of the most direct visual magic. Clever and creative."- Garrett Thomas

"There are very few people that have caught my attention quite the same way Nicholas Lawrence has. He's annoyingly good. I religiously follow his feed and love seeing his creations that constantly leave magicians (including myself) wishing we had half the creativity this man has. Pay close attention. I predict massive things."- Pete Turner

"Nicholas’ work consistently delivers beautiful, highly visual impact effects on the level that all of us grew up wanting magic to have…His designs create what REAL magic would look like…If you have a chance to get an insight into his mind and approach, I strongly suggest you take it."- Jason Latimer

Missing Piece - An unexpected torn and restored effect with a twist. A card is torn into multiple pieces and a single piece is separated and isolated by the spectator. Restore all the remaining pieces, leaving the chosen piece behind...creating an impossible souvenir.

Flash Flight - A quick, visual torn and restored card effect where a torn corner visually fly's from the top of the deck and attaches itself to the spectator's card, all while held in their hand.

The Fool - After having a card chosen and lost into the pack, remove a random card... Embarrassed to have found the wrong card, you go for plan B. Have the spectator look through the deck but before they know it, you appear to have been holding the card the whole time. Also covers his modern Shake Change & Card to Mouth subtleties.

Grilled Ease - This is a sandwich effect that utilizes a New principle to Vanish & Appear a signed card between 2 jokers. It's an easy-to-make, long lasting gimmick that can achieve what magnets or elastic could, plus more, with only using what you have at home.

BackMasked - An impromptu spooky card revelation disguised in the audio of a live recording moments earlier.

Shrinking/Growing Phone, Deck, etc. - This is a very Easy and Visual shrinking or growing illusion with everyday objects for everyday situations, a Great Visual opening effect.

DPK - A new principle using PK rings to accomplish some very clean and devious effects that are sure to get you thinking... color changing ring, ring thru finger, On Off.

On Off finger - Nicholas' first release, a visual and believable removal of your finger using your finger ring as a divider. A revived classic that fits well into any ring routine.

3 Fly - This is a fun and visual 3 fly routine using standard coins, with New and inspiring coin moves.

From Buffalo, New York, Nicholas has been obsessed with magic for 18 years, though he has only been publishing magic & consulting for 3. He specializes in creating visual card, coin & organic close up magic. He lives to inspire performers around the world, to try new things, and add hyper visual moments to their repertoires. He has published 11 DVDs and over 30 effects in total, with much more to come. Nicholas is also the Founder & co-owner of Sensor-Magic with long life friend and fellow Magician Rian Lehman.

If you've never been to a magic lecture, there's never been a better time. Sunday, November 20th, at 7:00pm, we're streaming Nicholas Lawrence LIVE in a spectacular 2-hour online lecture. Watch and learn things you won't find in any book or DVD.

Amazing! Report this review
Verified buyer Pro Privacy ON (login to see reviewer names) on February 13th, 2017
Gem upon gem in here!
1 of 1 magicians found this helpful.
Did this review help you? Do you want to respond to this review?

GET THIS NOW ALL WORKERS Report this review
Verified buyer Pro Privacy ON (login to see reviewer names) on November 22nd, 2016
my good friend Nicholas has done it again how his brain thinks of all these amazing effects which are for working magicians as well as if you just want to have a bit of fun with your friends all really visual i love the little ending that i will be incorporating into my ambitious card Amazing you need this in your life trust me you won't be disappointed.
1 of 1 magicians found this helpful.
Did this review help you? Do you want to respond to this review?

Some great. Some OK. Report this review
Verified buyer Pro Privacy ON (login to see reviewer names) on March 24th, 2022
His gimmicked tricks are strong (e.g., torn and restored card corner) and possible to make practically. Worth 5 stars/ Also has a strange but interesting final trick using back masking. However, his impromptu magic is just OK.
Did this review help you? Do you want to respond to this review?

Great! Report this review
Verified buyer Pro Privacy ON (login to see reviewer names) on June 21st, 2020
Nicholas Lawrence is one of my favorite magicians and when I saw his live lecture I knew I had to get it. Nicholas goes in depth on 10 amazing tricks. I would HIGHLY recommend this to anyone how is a fan of Nicholas lawerence.
Did this review help you? Do you want to respond to this review?

One word Genius with a capital G Report this review
Pro Privacy ON (login to see reviewer names) on August 23rd, 2017
This should have way more reviews than this. Nicholas Lawrence is one of the greatest thinkers and creators in magic. Everything on this lecture is pure gold.Met him in person at the expo in Chicago he showed me a few things up close - moving finger ring evolve,etc. Looks amazing because he is amazing.
Did this review help you? Do you want to respond to this review?

Excellent Report this review
Verified buyer Pro Privacy ON (login to see reviewer names) on November 25th, 2016
I expected Nicholas to deliver a brilliant lecture and I was not disappointed. I believe he is the reining genius of gimmick invention.
Did this review help you? Do you want to respond to this review?
Bestsellers