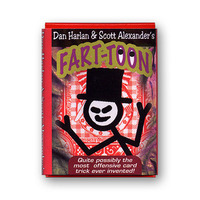 Today, when you order "Fart-Toon", you'll instantly be emailed a Penguin Magic gift certificate. You can spend it on anything you like at Penguin, just like cash. Just complete your order as normal, and within seconds you'll get an email with your gift certificate.

A card is freely named aloud by your spectator. You display a deck of cards, showing all the cards in new deck order.

On the backs of the cards, you show a stick figure magician, and explain that he's going to reveal the chosen card. Riffling the deck like a flipbook, the stick figure eats a taco supreme (with extra hot sauce!), which doesn't seem to agree with him too well. The stick figure emits a gaseous cloud from his rear end, with the selected card revealed among the toxic fumes!

From the minds of Dan Harlan, creator of the original Card-Toon, and Dan Alexander.

fun Report this review
Verified buyer Pro Privacy ON (login to see reviewer names) on October 29th, 2014
Really good and fun .. i do it most for adults since its got to do with (gas) but good material not bicycle quality .. but still good recommended to all not hard to do i had the old version but think this one is the winner..
1 of 1 magicians found this helpful.
Did this review help you? Do you want to respond to this review?

Scott is a maniac Report this review
Pro Privacy ON (login to see reviewer names) on April 6th, 2010
From the mind of evil genius Scott Alexander. Scott is a riot in person. Of course you need to pick your crowd for this one(Taco Bell perhaps?)

This one is great. The quality of the cards is spot on. People of all ages truly enjoy watching the cartoon assistant pick out the card they selected. Most skill levels will get the handling down with a little practice.
1 of 1 magicians found this helpful.
Did this review help you? Do you want to respond to this review?
Bestsellers