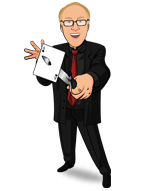 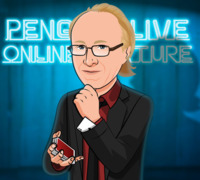 Today, when you order "Dan Paulus LIVE", you'll instantly be emailed a Penguin Magic gift certificate. You can spend it on anything you like at Penguin, just like cash. Just complete your order as normal, and within seconds you'll get an email with your gift certificate.

"Dan is one of those unassuming guys who turns out to be a sneaky SOB." - David Regal

"Dan was the very first professional magician I'd ever met. He's funny, casual, and has some great ideas. I'm happy that more people will get to enjoy my long-time friend." - Paul Vigil - Las Vegas Magician

"As a reviewer, I've seen thousands of performances. Dan is, by far, one of the funniest performers I've ever seen. If you're looking for funny, magical, and entertaining all rolled in one, then Dan Paulus is your man!" - Jeff Stone, MagicReviewed.com

"Dan Paulus is a highly successful full-time professional magician who is equally skilled at close up and stand up magic. His original touches and long experience make his lecture worth its weight in gold, both to seasoned professionals and sophisticated aficionados." - Richard Hatch, magic author, publisher, and owner of Hatch Academy of Magic and Music

"Growing up in my hometown, Dan Paulus was the king of the corporate market and always left audiences laughing and delighted. His ideas are well scripted and real world tested. There is so much to learn about comedy magic from Dan Paulus, the working pro." - Paul Draper

Shout! A quick tongue in cheek mind reading trick where the magician looks for small facial clues from the spectator to try and guess first the suit then the value of a single card. Hint...the spectator always flinches!

The Worlds Most Dangerous Card Trick! A Card Stab Routine by Dan Paulus, based on a premise from Tarbell. A signed card is lost in the deck which is then wrapped tightly in a sheet of newspaper. A large throwing knife is then plunged into the deck by the spectator. The newspaper is ripped off and the deck removed to find the signed card impaled on the blade of the knife! This is a great trick but the real fun is in the journey! The comedy routine around the trick is filled with possible danger to the entire audience.

Million Dollar Olram The second half of Dan's bill to impossible location. The burned bill appears inside a sealed envelope that was freely chosen (no force) from a stack of envelopes. What's more before the envelope is opened it is turned over to reveal that it has an identifying word, phrase, or symbol that differs from all the other envelopes in the stack. Making it clearly the one envelope that could contain the bill. A great routine that can easily be customized to fit a client's logo, convention theme, slogan or other catchy picture or word play. Or in a school or lecture setting the envelope could emphasize a key learning point.

Pure Skill An easy to do ACAAN with two decks that can also play on stage with jumbo cards. No sleights.

Dan's Traveling Aces The four aces are removed from the deck and shown one at a time before changing into all Aces of Spades. Then one of the Aces is used to turn the other three of the Aces of Spades into three Queens. The Aces of Diamonds, Hearts, and Clubs are then found at a place in the deck that had been randomly cut to by a spectator before the trick started.

The Impostors Based on a Larry Jennings effect, this handling is slightly easier and ends much cleaner. The Magician challenges the two Jokers to try and find a chosen card. But first, the magician, who is not being a good sport about this, sets some impossible rules for the Jokers. First, the magician gets to confuse the Jokers by distracting them with an impostor card. A second card that is the same value and color as the chosen card but the wrong suite. Second, the Jokers have to find the card without moving from the top of the deck.

The Jokers are placed face up on top of the deck, and without moving seemed to capture a face down card. Unfortunately for the Jokers they fail the first time, finding the impostor card. Then the Jokers are pushed together face down through the side of the pack for their second try. When they come out the other side they are spread to show that they have now captured...nothing. They failed, but turning over the two Jokers we see that they did change into two other impostor cards - the other two that match the chosen card.

One last chance, the magician spreads out the deck to find the two Jokers now face up in the center with a face down card trapped between - the chosen card!

The Quiz Show Dan's routine for the gimmick coin set known as Copper Silver Half.

Why I Collect Pennies A fast paced Spellbound Routine that changes a silver dollar into a giant penny then back again. Then the penny is produced, vanished, reproduced, and turned into a jumbo coin. Then a second jumbo coin is produced using a visual and audible illusion!

The Kennedy Conspiracy Bill While relating the eerie connections between the Kennedy assassination and the dollar bills printed afterward, Dan causes a Kennedy half-dollar to pass through the presidential seal of a Kennedy bill. Leaving behind no hole but plenty of evidence that the coin really did pass through the bill. No magnets, no folds in the bill, no secrets slits. Both the bill and coin may be given away as a souvenir when the trick is over.

Countdown A comedy torn and restored card trick where the wrong card is torn to try and create the correct card.

In 1991, after paying his way through college by performing for anyone who would watch him fan a deck, Dan Paulus made the decision to give up his ridiculous dream of becoming a high school teacher and pursue the more secured life of a being a fulltime magician. Dan has been a working pro ever since.

Currently residing in Salt Lake City, Dan has performed for hundreds of corporations and private parties from LA to New York. He has been an on set adviser for two CBS shows "Touched by an Angel" and "Promise Land", and his hands have been seen performing magic (and playing chess) on three national TV commercials. Television has yet to discover Dan's good-looking face. He was also the magic consultant for the hit online game The Sims providing performance and career information for magician characters in "The Sims 3 Showtime".

But his most impressive feat is raising his four amazing children while living the lifestyle of a working magician and stay-at-home dad.

dan paul live Report this review
Verified buyer Pro Privacy ON (login to see reviewer names) on January 19th, 2021
get this lecture,good effects ...workers,my favorite
kennedy conspiracy,good pattern and presentation for a bill and coin trick.very good explanations
Did this review help you? Do you want to respond to this review?

Knocked it out of the park! Report this review
Verified buyer Pro Privacy ON (login to see reviewer names) on September 6th, 2017
Dan has a very unique approach to magic and this really shows. I absolutely love the Kennedy Conspiracy half dollar melt through a dollar bill. Dan gives some great examples of routines that give you an easier method over knuckle busting methods that make handling a deck of cards less of an obstacle and still have killer effects.
Did this review help you? Do you want to respond to this review?

What a Terrific Lecture ! Report this review
Verified buyer Pro Privacy ON (login to see reviewer names) on August 28th, 2017
It is always a pleasure to see a seasoned professional work with an audience and then be able to learn such solid and doable magic. Dan is a graet human being with a wonderful sense of humor. I am proud to call hime a good friend and see his work appreciated on a larger scale through the Penguin Lecture series. Buy this lecture and see what I'm talking about!
Did this review help you? Do you want to respond to this review?
Bestsellers