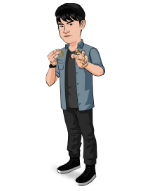 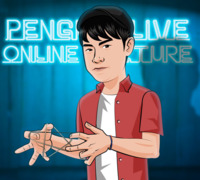 Today, when you order "Hanson Chien LIVE", you'll instantly be emailed a Penguin Magic gift certificate. You can spend it on anything you like at Penguin, just like cash. Just complete your order as normal, and within seconds you'll get an email with your gift certificate.

"Hanson is very creative. He is one of the best rubber band creators and he has made major advancement to this type of magic. " - Joe Rindfleisch

"Hanson is one of the greatest minds in magic, he not only fools me consistently but offers a gift of true astonishment." - Nicholas Lawrence

"Hanson is the new Asian genius from Taiwan. With fresh new ideas, Hanson presents modern magic in his own stylish way." – Lukas

"I think Hanson is one of the most creative magicians. He showed a lot of his new creations to me and most of them fooled me badly." – Ponta the Smith

YA Escape A rubber band is wrapped around the middle finger twice, and then escapes from the finger immediately.

Ultimate Jump A rubber band is wrapped around the first and second fingers and impossibly jumps to the third and fourth fingers while spectators hold onto the tips of the fingers.

Touch  A rubber band jumps from your hand to the spectator's hand in the blink of an eye.

Frozen Band A rubber band is held with the thumb and index finger, and even without the thumb it keeps the round shape as if it’s frozen in mid-air.

Hanson’s Linking bands Two rubber bands are linked with some rubs, and one band visually melts through the other while one of the bands is wrapped around the spectator’s wrist.

Breaking Point A rubber band is accidentally broken. Magician ties a knot at the ends, and makes it restored to its initial state.

Don’t Throw Garbage A plastic bottle is crashed and then returns to its original stat.

Solid 2 Solid The purest cap in bottle effect. Take the cap off a bottle, and the cap is hit on the bottom of the bottle. Instantly the cap is inside the bottle. Straight forward and highly visual. The bottle can even be handed to the audience right after the effect.

Hanson Chien is a full-time performer, creator, and consultant of TV shows, movies and other famous magicians.

At 19, Hanson released his first magic DVD “Touch”, and has been causing a storm in the magic society. Many of his creations have already been performed on TV, and Hiro Sakai (a.k.a. famous Dr. Leon from Japan) also commented the rubber band magic “Touch” would become one of the classics, like Crazy Man’s Handcuffs.

He is also the first Taiwanese magician whose product got released by some top magic companies. Therefore, he is considered one of the pioneer creators in Taiwan’s magic society.

Hanson worked as a consultant for celebrity magician YIF in China. In 2015 he was also featured in YIF’s “Art of Magic” Season 2, and that single episode has more the 10 million views! That video showed his unique way of rubber band magic and stunned every viewers, especially “Band Jumping 4 times (BJ4)” and “Freeze!”. These tricks are so popular that many people shot their own versions and shared them on the internet.

This is so awesome I am speechless! Report this review
Verified buyer Pro Privacy ON (login to see reviewer names) on September 8th, 2017
I am only half way through the lecture but I can't wait to write my review.

Hanson's tricks are so awesome and he is so so so humorous! I can't stop laughing when watching his lecture.

It is really entertaining and I am learning so much at the same time! I wish I can rate more than 5 stars! Bravo!
2 of 2 magicians found this helpful.
Did this review help you? Do you want to respond to this review?

Worker and visual magic at its best! Report this review
Pro Privacy ON (login to see reviewer names) on September 7th, 2017
I almost passed on this. I already have a couple rubber band effects, and I didn't think I needed more! I assumed this would just have some new rubber band effects but this was so much more.

If you have rubber bands on your wrist for any single trick, you owe it to yourself to watch this lecture. You will get an arsenal of magic that will blow your spectator's minds!

This lecture is worth every penny, thanks Hanson!
2 of 2 magicians found this helpful.
Did this review help you? Do you want to respond to this review?

One of the best. Report this review
Pro Privacy ON (login to see reviewer names) on September 6th, 2017
In the top 5 Penguin lectures I've bought.

Are you at all interested to learn strong, practical rubberband magic? Then you NEED to get Hanson's lecture. Sooooo much value here.

I will watch this over and over. HIGHLY RECOMMENDED!
2 of 2 magicians found this helpful.
Did this review help you? 1 comment

Brilliant Report this review
Verified buyer Pro Privacy ON (login to see reviewer names) on July 20th, 2019
A great lecture. He covers a range of interesting tricks, teachings his brilliant 'touch' and his bottle trick is outstanding. His patter is a bit hit and miss, but you can't deny his talent. Well worth your time if you like rubber band magic.
1 of 1 magicians found this helpful.
Did this review help you? Do you want to respond to this review?

Amazing Report this review
Verified buyer Pro Privacy ON (login to see reviewer names) on January 21st, 2018
I love his ideas and the way he teaches his routines. Super solid work on rubber band effects. Can totally recommend this!
1 of 1 magicians found this helpful.
Did this review help you? Do you want to respond to this review?

Hanson Chien inspires me Report this review
Pro Privacy ON (login to see reviewer names) on September 11th, 2017
Love it, very entertaining and educative. The tricks he teaches are fantastic. His rubber band stuff is so unique. All of his effects are practical worker's and this lecture did not disappoint. Thanks Hanson for sharing!
1 of 1 magicians found this helpful.
Did this review help you? Do you want to respond to this review?

Very good Report this review
Verified buyer Pro Privacy ON (login to see reviewer names) on September 5th, 2017
Mostly rubber band magic which is great for me. I learned a few new things but the fine points he put on the things I already know were well worth the price of admission.
1 of 1 magicians found this helpful.
Did this review help you? Do you want to respond to this review?

Many tricks “worth the price of the lecture” Report this review
Verified buyer Pro Privacy ON (login to see reviewer names) on June 28th, 2022
The stand outs were Touch, Frozen Band, and Freeze! All look like special effects. All practical.

There were also a couple of clever plastic bottle tricks, Don’t Throw Garbage and Solid 2 Solid.
Did this review help you? Do you want to respond to this review?

stretched out Lecture Report this review
Verified buyer Pro Privacy ON (login to see reviewer names) on September 6th, 2017
Hanson's ingenuity & creativity are undeniable
My observation is skilled but inexperienced in terms of pre show preparation & not conscientious of contextual ( live Lecture )time constraints as getting to the point rather then drifting into abysmal limbo of an effects explanation is not an option !
It was gracious of him spending 3 & a half hours explaining the first two effects ! That's when I took out the whiskey & got blasted !
impromptu artistry is defiantly not his style ! There shouldn't be any reason for unstructured presentations if your a professional performer !Most of that stuff are rehashed Dan Harlan band ideas !
Check out Harlan's classic video instructionals especially band shark !
Hanson has definitely taken band artistry to the next level as my favorite
Joe Rindfleisch's extreme ruberband magic & jumper are amazing contributions to the art of rubber band Magic !
0 of 4 magicians found this helpful.
Did this review help you? Do you want to respond to this review?
Bestsellers