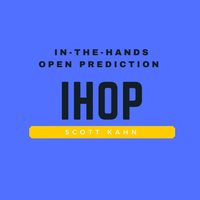 Today, when you order "In-The-Hands Open Prediction (IHOP) by Scott Kahn", you'll instantly be emailed a Penguin Magic gift certificate. You can spend it on anything you like at Penguin, just like cash. Just complete your order as normal, and within seconds you'll get an email with your gift certificate.

The magician introduces two packs of playing cards, one blue and the other red. Both decks are shuffled and a spectator selects a card from the blue backed deck. This mystery card is placed sight unseen somewhere in the face down red deck.

The red pack is then shuffled so that no one knows where the blue backed mystery card is located. Holding the deck face up, the cards are dealt face down into a pile in the spectator’s hands. At any point, the audience member instructs the magician to deal a card face up onto the pile. This is a free choice and they can change their mind as often as they wish.

Once a card is decided upon, the remainder of the cards are turned face down onto the pile and the pack is spread from hand to hand. The spectator’s odd backed selection is not seen. When the face up card that the spectator nominated is turned over, it is seen to be their blue backed selection. Amazing!

As a kicker, the magician then proceeds to show that he knew the spectator would choose the card in question. The blue deck is spread and is seen to contain only one red backed card, placed there from the other deck prior to the beginning of the effect. It matches the spectators selection. An inexplicable miracle!

“Your In-The-Hands Open Prediction is a wonderful way of turning the plot upside down. I was severely fooled!” – Thomas Blomberg

“Great work Scott! With your two deck open prediction, I got my money’s worth. It is simply brilliant… beautifully constructed and it will fool people badly!” – John Carey

“WOW! In-The-Hands Open Prediction is well worth the price of admission. Simple, off beat and fun.” – Brent Braun

“I did this effect several times last night table hopping and each time it killed. Powerful, take no prisoners card magic. If this were 16692, Scott would surely be on trial for witchcraft.” – Michael Kaminskas

“One of the absolute cleanest Open Prediction effects I’ve ever seen. It’s simple, but it has some very nice convincers which would fool any laymen who saw it (and most magicians too). You can tell Scott has worked this routine like crazy. I’ll be adding it to my repertoire.” – Madison Hagler