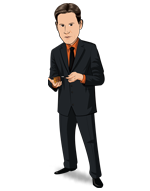 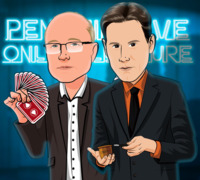 Today, when you order "David Peck and Brian Roberts LIVE", you'll instantly be emailed a Penguin Magic gift certificate. You can spend it on anything you like at Penguin, just like cash. Just complete your order as normal, and within seconds you'll get an email with your gift certificate.

"David Peck is one of the great pros from Canada. A wonderful performer." - Richard Lyn

"David's magic is not only visually appealing and magical for all who watch, but for magicians offers up a great variety of magic using sleight of hand that ventures far from a deck of cards". - i-Tricks.com

"Brian Roberts does SMART magic. Every little detail has been thought out and tested until what remains has been scientifically proven to blow spectators minds. I can't wait to learn!" - Ben Train

"Brian Roberts approach to Magic is elegant and creative. Each effect he performs is pure gold". - strong>Joe Rindfleisch


What will they teach?

FLURRY-US- A magical and playful jumbo coin routine that builds on the Kurtzian classic.

ACES- A four ace routine that can be done standing up and in a cocktail setting that is magical, practical and easy to do.

LEMON- A card appears in a lemon in a strong, magical and extraordinary routine that utilizes ideas from Stewart James, Al Baker and Derek Dingle to make for an effect that works well for small and large audiences.

THREADED- An elegant and sophisticated take on the Gypsy Thread as classic that will stand out as a reputation maker for the professional stage and/or parlor magician.

WOODEN- 3 matches vanish in David's bare hands and reappear inside of a small matchbox in clear view of the audience.

CANED- A beautiful variation on the appearing cane that will knock the audiences socks off.

A TIGHTER WRAP- A lovely opening effect using a piece of gum. A real fooler. You'll be surprised at the audience reactions.

PENNYTRAIT- This time-traveling coin routine is intended to theatrically reframe a more typical flurry effect. This is Brian's go-to routine when asked to perform magic and the resulting giveaway is a meaningful and memorable way to connect with your spectator.

STRANGE ATTRACTION- A copper-silver routine in which the coin's physical properties are temporarily altered. This is a formal, multi-phased routine that can be performed without the use of a table, making it ideally suited for the strolling performer.

PRINTING BUSINESS- A memorable way to print and present your business card, featuring a very clean display of 3 blank cards, based on current design standards.

WAND & SILK- A visually simple, stand-up routine with a call-back finish. Brian opened his dinner theatre shows with this effect and it set the stage for his style of magic and performance.

Brian's Bio: Brian's interests in magic began at the age of 10, studying sleight-of-hand technique under Canadian magician Alistair Younger. Brian has since entertained groups in corporate, public and private settings with performances ranging from close-up to parlor, stage and dinner theater. Brian is a member of the famed Fechter's Finger Flicking Frolic (Obie's 4F), a yearly invitation-only gathering for magician's from around the globe. In 2008 Brian was a guest performer and lecturer at The Japan Cup in Tokyo. In 2010 Brian competed in the Society of American Magician's close-up contest and was given the Presidential Award for camaraderie and sharing with fellow magicians. Brian's original material has appeared in the pages of Genii magazine and in his self-published notes titled Coin Operated. Brian was a featured performer on James Alan's Toronto-based dinner theater show Magic Tonight. In 2016, Brian collaborated with David Peck to develop a socially-driven magic lecture called Spare change for Social Change and released a combined booklet titled The Notes.

Brian's current interests in magic include: paying homage to the wonderful tricks of the past, and to the creation of new ideas and concepts; each conceived and constructed by careful study of magic's rich history.

With a formal education in art, design and marketing, Brian operates a prominent communications agency in Toronto Canada. He is also a featured speaker at events across a broad range of industries and business sectors.

David's Bio:David is an award winning prestidigitator. A true master of sophisticated sleight-of-hand and co-producer and creator of the award winning children's television show Spellz.

His compelling and appealing approach are summed up within this recent statement from the dean of Atkinson University: "A natural talent, he combines amazing sleight-of-hand magic, a strong stage presence, a captivating sense of humor, and a youthful, energetic charisma..." Working in the greater Toronto area for over thirty-five years he has performed for and entertained audiences of all shapes and sizes.

He is also is the founder of SoChange, a social enterprise that works with the corporate and NGO community in leadership development, innovation and entrepreneurship. He holds a Masters degree in Philosophy from the University of Guelph and has completed postgraduate work in International Development and teaches in the business school at Humber College in Toronto.

In 2008 David created the Mosquitoes Suck Tour - a global youth initiative that entertains, educates and advocates. He founded yChange, a social justice conference that has been held in Toronto, Vancouver and Hong Kong.

David was named a Global Hero by Verge magazine in 2009 and is the authour of Real Change is Incremental, which recently won a Word Guild Culture award. His podcast Face2Face is a "conversation" with authors, filmmakers and people making a difference. He has published over 350 interviews and appears on Rabble.ca and works closely with the Toronto International Film Festival and Hot Docs.

GREAT PRACTICAL LECTURE! Report this review
Pro Privacy ON (login to see reviewer names) on June 4th, 2018
These guys are amazing. The lecture is full of interesting takes on classics as well as brilliant new routines. There's classic magic, mentalism, cards, little bit of everything. Very good. Lots of workable material. One of my favorite lectures!!!! Great job!!!
1 of 1 magicians found this helpful.
Did this review help you? 1 comment
Bestsellers