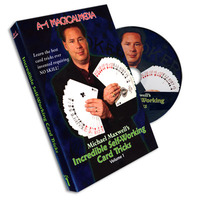 Today, when you order "Incredible Self Working Card Tricks Volume 1 by Michael Maxwell - DVD", you'll instantly be emailed a Penguin Magic gift certificate. You can spend it on anything you like at Penguin, just like cash. Just complete your order as normal, and within seconds you'll get an email with your gift certificate.

FREE SHIPPING TO UNITED STATES ON ALL ORDERS OVER $50.
+ Add to Cart
Review Wishlist
Out of stock.
card
close-up
dvd
Tweet

Best selling author, DVD producer and all-around swell guy, Michael Maxwell, has painstakingly researched and compiled what he considers to be the most amazing "self working card tricks," ever created - amazing tricks requiring No Skill! These are killer card tricks to have in your arsenal for those special occasions when someone hands you a deck and says, "Hey, Mr. Magician, show us a trick!" Even if you have never handled a deck of cards before, you can easily master these diabolical effects. Special care has been taken to include effects that are not generally known, even to knowledgeable card men.