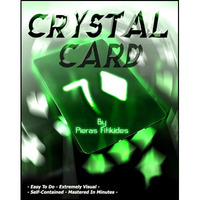 Today, when you order "Crystal Card by Pieras Fitikides", you'll instantly be emailed a Penguin Magic gift certificate. You can spend it on anything you like at Penguin, just like cash. Just complete your order as normal, and within seconds you'll get an email with your gift certificate.

Crystal Card is a revolutionary idea based on a new principle. It can be used to perform a wide variety of surprisingly visual effects including: