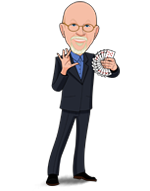 Today, when you order "Cardiographic Lite Refill by Martin Lewis", you'll instantly be emailed a Penguin Magic gift certificate. You can spend it on anything you like at Penguin, just like cash. Just complete your order as normal, and within seconds you'll get an email with your gift certificate.

FREE SHIPPING TO THE UNITED STATES.
+ Add to Cart
Review Wishlist
In stock: usually ships within 24 hours!
Order in the next 11 hours 58 minutes and it will ship TODAY!
Tweet

30 more refills for your Cardiographic Lite.

Cardiographic LITE packs all the power of its famous parent. Featured in David Copperfield's touring show, this is the trick that recently earned Jon Dorenbos a golden buzzer on America's Got Talent!

Effect: Spectator selects a card. Magician says he's drawn the card on a pad, and turns the pad around - it's an entire deck of cards! But not to worry - suddenly a drawing of the spectator's card magically rises from the drawing! You actually watch it rise - looks amazing! AND, the magician can tear out the page and hand it to the spectator as a souvenir!