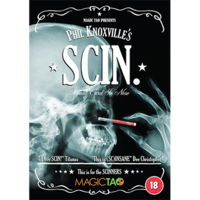 Today, when you order "SCIN (Gimmick) by Phil Knoxville", you'll instantly be emailed a Penguin Magic gift certificate. You can spend it on anything you like at Penguin, just like cash. Just complete your order as normal, and within seconds you'll get an email with your gift certificate.

WARNING: THIS EFFECT SHOULD NOT BE SOLD TO OR PERFORMED BY ANYONE UNDER THE AGE OF 18. THIS DVD IS FOR REFERENCE ONLY.

This is for the SCINNERS

A card is selected from the deck, signed and returned. You lose the card in the deck and ask your volunteer to visualize their card, you then ask them to push card into your head. You take a pair of tweezers and begin to pull the card out of your nose. Simple. Brilliant. Original and just a little twisted. It looks like real magic because it is real.

Phil Knoxville reveals his methods to achieve this devious and shocking effect, with both a Geek Method (Phil's preferred presentation) and a method that uses only sleight-of-hand, all taught in detail on the DVD. The DVD also comes with sample gimmicks and instructions on how to make your own refills.

"Phil Knoxville, a rock star in every life except this one - so he's settled for being a comedy magician that rocks instead. I have seen SCIN performed up close and personal. I was amused, mystified and disgusted all at once!"
Anthony Jacquin

"This is (SC)INSANE. Phil has breathed new life into a classic geek effect here, creating a piece of disturbing and hilarious magical theatre. I can't wait to try this out myself!"
Dee Christopher

"Phil Knoxville proved yet again his rockstar of comedy magic status by fooling the crap out of me, making me laugh & dazzling everyone. SCIN is unlike anything I've seen before! And I loved every second of it."
Ben Cardall

Totally disappointed Report this review
Verified buyer Pro Privacy ON (login to see reviewer names) on January 27th, 2016
(This review is for SCIN (Gimmick) by Phil Knoxville)
I purchased this dvd with great expectations, given I've been performing the blockhead stunt for 5 years now and I've always felt as if it lacked magic somehow.
The moment I saw SCIN I went through the "I wish I'd come up with this idea myself".
The moment I finalised my order I started wondering about ways to get the trick done, waiting for the DVD to get shipped. The problem is I received it, I watched it twice and I'm still wondering.

As far as the Idea is concerned, i'd give SCIN 5 stars. When it comes to the method and the tutorial, everything is missing: the gimmick isn't worth the cost (which is OK, since you're paying the idea more than anything else), you end completely dirty, with an object which can't be handed out for examination, unless you want to follow some alternative methods which are hinted at but never really explained (maybe because they are simply to inconsistent, with little thought in terms of structuring and directing attention).

Furthermore, the whole blockhead explanation is poor too. I would never follow the advice given, as I'd feel like I were risking scratching my nostrils or hurting myself (and again, I've been doing this stunt for quite a while now following common sense more than any tutorial whatsoever - which is still something I would never suggest that anyone should do).


I'm really sorry to say so... don't buy it. Save your money for something else. All you could get from this SCIN is in the acronym. Unfortunately, nothing else which could feel worth it can be found in the DVD/Gimmick.
3 of 4 magicians found this helpful.
Did this review help you? Do you want to respond to this review?

Geektastic Report this review
Pro Privacy ON (login to see reviewer names) on February 4th, 2016
(This review is for SCIN (Gimmick) by Phil Knoxville)
I'm into geek magic so as soon as I saw this effect I knew I had to have it! I was crazy excited and must admit when I opened up the box I did have a bit of what the **** moment where the gimmick was concerned. I immediately watched the DVD and all became clear and the truth is, without giving anything away, SCIN isn't possible without a gimmick and if you're hoping the gimmick will do all the work for you you're hoping for too much - this is geek magic after all! It's super simple, which is actually a good thing as it's so easy to make more gimmicks! They're extremely cheap to make too, a few cents each I guess and you'll almost definitely have everything you need because you need to so little! There's also a number of variations on the DVD, so you can work out what's best for you and the situation you're in. I have to admit part of the method is actually really sneaky but to the audience it blows them away, to them it's a (sick) miracle they can't figure out! Even one of my magician friends begged me to tell him how I did it.

There's a sleight of hand method taught on the DVD but I decided to take the plunge and go for the geek version and I'm glad I did but I guess for the squeamish there's that option. I tried this out on some friends first and it completely freaked them out! Especially as they thought I was going to do yet another boring card trick, they didn't see this coming LOL! They've also seen me do stuff like this before but never quite like this! I hope this isn't giving anything away but full marks for an honest trailer! - after you get the DVD you realise it hides nothing and performing looks exactly as it does on there. The human blockhead is on there and definitely a more bonus effect, which I guess is all it's meant to be, the card in nose is what it's all about!

You could give card away at the end, depending on which version you use (some methods you can't), but the truth is no one wants the card! Why would they!??? I love performing SCIN, my mom think's I'm disgusting and that's just fine with me!!
0 of 1 magicians found this helpful.
Did this review help you? Do you want to respond to this review?
Bestsellers