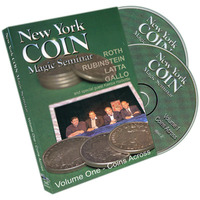 Today, when you order "New York Coin Seminar Volume 1: Coins Across - DVD", you'll instantly be emailed a Penguin Magic gift certificate. You can spend it on anything you like at Penguin, just like cash. Just complete your order as normal, and within seconds you'll get an email with your gift certificate.

The New York Coin Magic Seminar guys, Roth, Latta, Gallo, Rubinstein, along with our special guest from COINS SEMINAR II Kainoa Harbottle, filmed the first of what we hope will be several DVD's on various aspects of Coin Magic. Our first offering is a special TWO VOLUME DVD, over FOUR HOURS LONG, on the subject of COINS ACROSS. We will present over 27 different routines on coins across, including new techniques, presentations, applications, unpublished material, palms up, down, open, closed, gaffs, no gaffs, extra coins, no extra coins, stand up , sit down and MORE! And on top of that, new and NOVEL ways to get the last coin into the spectators hand!

From ROTH - His classic and masterful rendition of Winged Sliver, Chink A Chink, Shell Coins Across and his handling of the Chanin Coin Production and Victor Coins Across. David's handlings are so beautiful that you might be tempted to stop right there. But wait, there's still more!

From RUBINSTEIN - SIX routines, including Retro Fly (the hit of his recent European tour), two handlings of The Impossible Four Coin Trick (the first was only taught at the Coin Seminars, the second is an UNPUBLISHED handling that allows you to get THREE ahead), Short Term, Long Term (unpublished and using only three coins), and two updated unpublished handlings of his Specciolini Bros. Coins Across, including his impromptu and formal show presentations. Included on this DVD for the first time are uses of the Purse Palm Subtlety, and TWO false counts that you will immediately put to use in your own routines!

From LATTA - Six more routines - two versions of Slippery Silver, Spectator Coins Across (this is the place to learn Geoff's handling of Han Ping Chein), M.A.Y.B.E.L.L.I.N.E., the trick with the three coins (a reputation maker!), and Geoff's technical re-handling of Kenner's Three Fly.

From GALLO - Five routines are presented that will quickly establish you as a master of coin magic: Han Ping Chien Less (don't blink!), B.O.B. (a handling with coins traveling while isolated under a glass, and an INCREDIBLE technique for getting the last coin into a spectator's hand), Easy Coins Across (thanks, spectator boy!), Sliding Eagles (one of Mike's favorites), and Coins into Spectator's Hands.

From Harbottle - Four routines in the style that has firmly established Kainoa as one of the movers and shakers in the coin magic world. Another Flipping Three Fly baffles the imagination, Punctuated Equilibrium Coins Across (Mutobe Baby, yeah!), Deja Flew (with a REPEAT coins into spectators hand - twice as nice!), and lastly, Deja Flew Two (when one is not enough).

We could have stopped there, but not the guys from the New York Coin Magic Seminar!

There is a BONUS SECTION, with the panel discussions on the routines presented, history of fingertips across, and what actually constitutes a coins across. But no, we couldn't stop there! There is also a sneak peek into our famous New York Coin Magic Seminar with a video montage, extra tips on moves used in the routines, a BONUS coins across from Geoff Latta, and even a surprise or two more.

Best of the series Report this review
Pro Privacy ON (login to see reviewer names) on April 8th, 2010
(This review is for New York Coin Seminar Volume 1: Coins Across - DVD)
This is DVD is a valuable education in a classic of coin magic. All of the other coin magic seminar DVDs are great but this is definetly the best. With all the possibilities with the coins across plot, it is a wonderful experience to see just what is possible. I think the best part is seeing Kainoa Harbottle's work. His skill is unbelievable and good to see if you struggle with what is in print. Beginners will struggle with this, but intermediate coin workers will be able to grasp a good portion of the material with a little work. This DVD set is a real treat and should be in every coin worker's collection.
2 of 2 magicians found this helpful.
Did this review help you? Do you want to respond to this review?

sweet Report this review
Pro Privacy ON (login to see reviewer names) on April 5th, 2010
(This review is for New York Coin Seminar Volume 1: Coins Across - DVD)
Every year, The NYCS guys have produced a full workshop on coin magic. The study, performance, practice, and general art of coin magic. Everything you can imagine. They get guys like Eric Jones, Bill Citino, Al Schneider etc. Top guys in the industry.

I really like the way they produced this. It has live panels from the actual performance and workshops. What's interesting is the material. I love the different types of effects too. SOme work excellent for bars, some work for close up, stand up, etc.

The teaching in some of these lacked something. What is cool though is how long each Kainoa Harbottle effect is. SOme of them go for 45 minuts each in the explanation and he goes into serious detail.

I suggest you buy this if you like coin magic. The production quality was nice. And if you are serious about coin magic, this will be heaven for you!
2 of 2 magicians found this helpful.
Did this review help you? Do you want to respond to this review?

Thorough! Report this review
Pro Privacy ON (login to see reviewer names) on April 4th, 2010
(This review is for New York Coin Seminar Volume 1: Coins Across - DVD)
This is almost a bible of coins across ideas and subtleties. If you like the coins across plot then you will certainly find a new routine or move to adopt in this DVD.
1 of 1 magicians found this helpful.
Did this review help you? Do you want to respond to this review?

hi there Report this review
Verified buyer Pro Privacy ON (login to see reviewer names) on June 19th, 2013
(This review is for New York Coin Seminar Volume 1: Coins Across - DVD)
i just wish they would tell u that u need a shell coin 2 do half of the tricks on the 2 dvd's or put 1 in with the dvd's cus now i have 2 bye 1 an then pay 4 the shiping all over again an i did the 2 day shiping so i will have the dad's 4 my next show an now i can only do half of them without a shell coin
1 of 4 magicians found this helpful.
Did this review help you? 1 comment
Bestsellers