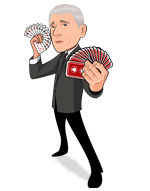 Today, when you order "George McBride's McMiracles With Cards - DVD", you'll instantly be emailed a Penguin Magic gift certificate. You can spend it on anything you like at Penguin, just like cash. Just complete your order as normal, and within seconds you'll get an email with your gift certificate.

"Once you watch this DVD, you'll understand why I believe George is among the best in the world."
- Steve Friedberg

Scotland's own George McBride is widely known amongst the underground magic fraternity as a card handler of superlative skill. A contemporary of Roy Walton, Gordon Bruce, Jerry Sadowitz and Peter Duffie, he is a master technician and renowned for his ingenious trick construction.

George McBride's McMiracles With Cards is the definitive collection of all the routines George has developed and refined over the last decade of obsessive work. Avoiding overly complex and unnecessarily labyrinthine structures these tricks are honed into laser focused, streamlined masterpieces. Everything on this project is a trick you WILL WANT TO PERFORM!

Over a staggering 2 hours, George unleashes 17 routines, carefully structured into 4 'sets'. The material ranges from incredibly easy to do, right through to 'that is something I want to do when I grow up'.

The wealth of knowledge squeezed into this project is breathtaking. Technique, construction, overlapping method, awe inspiring sleights - it's all here! And you can learn the lot!

PRAISE FOR McBRIDE'S McMIRACLES WITH CARDS:

"The aptly named McMiracles With Cards is a DVD featuring a variety of top-bracket card routines. The methods are clever and totally baffling and will suit all skill levels; from self-working to advanced. Fans of George's previous work can expect excellent trick-construction along with careful attention to fine detail. This is a collection of card magic not to be missed."
- Peter Duffie

"George has been very generous in explaining some of his finest creations. His technical skill and use of misdirection should be studied by every aspiring card handler."
- Andrew Galloway

"George handles cards beautifully and is a man at the top of his game. Card enthusiasts around the world are going to love this collection."
- John Carey

"I had the pleasure of attending George McBride's lecture and hanging out with him at a convention in Buffalo, NY a few years ago. Based on that weekend I happily and heartily recommend anything he puts out - sight unseen!"
- Paul Cummins

"George's, 'Cards to Pocket' ALONE is worth the price of this DVD. But there are many, many more treasures to be found within this collection."
- Gordon Bruce

"George McBride is one of the most gentlemanly people you'll ever meet. Do not let that fool you; his card work is devious, well thought-out, and will absolutely astound your spectators. I've had the honor of watching him work in person. Once you watch this DVD, you'll understand why I believe George is among the best in the world."
- Steve Friedberg

A skilled Scottish card handler shares some of his best work Report this review
Pro Privacy ON (login to see reviewer names) on March 29th, 2019
(This review is for George McBride's McMiracles With Cards - DVD)
OVERVIEW

Perhaps I'm not the only one who hasn't come across George McBride's work before. But this newly released video from Big Blind Media, McMiracles With Cards, has certainly cured me of my former ignorance! I now have a new-found admiration for this skilled and respected card handler from Scotland, who in this video is sharing 17 fine card tricks that he's honed through years of experience.

Format: It's easy to navigate the DVD; you simply select which of the four sets of routines you want to watch, then pick the trick of your choice, and can select either the performance or explanation. The performance clips show George performing to a single spectator (e.g. a BBM staff member like Liam Montier), and the same is the case with the teaching sections.

Tricks: There's a ton of solid material here, with more than two hours of footage. You get 17 tricks, and these are considered a definitive collection of the routines George has developed over a lifetime of work. Some of the routines are completely baffling, and will certainly astound laymen and magicians alike. You're guaranteed to find something here that you'll like, because it's strong magic. There's also a very good variety of effects, ranging from packet tricks, tricks you can perform impromptu with a borrowed deck, to tricks involving a set-up or a gimmick. Some of it reworks material you may have seen before, by combining solid material from masters past and present, and refined by George with his own style.

Style: I really enjoyed Mr McBride's presentational style, and he gave me some good ideas I could incorporate into my own magic. Because good presentation is one of the most important parts of good magic, this makes these tricks worth learning or even watching. Just take a look at the demo performance of Vanishing Lie Detector and you'll see what I mean. Others tricks I especially enjoyed were Tom, Dick and Harry (three selections impossibly vanish and then reappear elsewhere), and Bend and Split (a selected card splits into two cards that add up to its value). Quite a few of his tricks have the spectator sign a card, to add to a sense of impossibility, since there's no chance that the magician can ring in a duplicate.

Teaching: It's not hard to see why McBride is the subject of so much respect for his skill with cards. It's a real joy to watch him perform and teach, although his strong and charming Scottish accent can take some getting used to. But even as a spectator to his instruction, there's much that can be learned. The teaching is clear, and Mr McBride is definitely very gifted at what he does, and it's a pleasure to see him go through his moves and learn from him. When there are more difficult sleights required (e.g. Vernon's Multiple Shift, Hammond Switch, Hofzinser Top Change, or Ascanio Spread), these are all taught.

Difficulty: This isn't geared to the beginner, unlike many of the other Big Blind Media videos. Some self-working material is included, but for the majority of the routines you will need practice, and familiarity with fundamental skills and card sleights. There are even some more challenging routines for the advanced card man, and tricks like Card to Pocket and Card to Card Case will require some good skills with cards to be performed well. The moves George does in tricks like the Double Swap Mystery and the Triola Mystery are super smooth, and are well worth the effort to master, because they make transposition effects seem thoroughly impossible. Overall there is quite a variety in terms of the level of difficulty, with a range of tricks from quite easy to more difficult, but most of the material is around intermediate level.

Crediting: I particularly appreciated the good work with crediting, which deserves special mention. During the explanation part of the video, scrolling text appears at the bottom of the screen that indicates the origin of the various moves and the source of the tricks being demonstrated. Acknowledging sources is an important tradition in magic, and this is a wonderful way to do it.

Production: Well, this is Big Blind Media we're talking about here! These guys are arguably the very best at what they do, so that means that this video comes with the highest production values you could want. The sound quality is clear, lighting and camera angles are fantastic, and that makes everything a real pleasure to watch.

I love card magic, and I enjoy learning new material, and also discovering new magicians, and watching skilled performers in action. With McMiracles With Cards, I've found myself another great practitioner of card magic to enjoy and learn from.

This collection of tricks from George McBride does ramp up the degree of difficulty somewhat from your average video from Big Blind Media. But it's a very large collection that includes 17 different routines, including some easier material. So it's very good value, because it's packed with material, and it will take you a good while to work through it all. And with the usual high quality production values we've come to expect from Big Blind Media, we're not quickly going to be disappointed!

It's a real pleasure to learn from a man so skilled as George McBride, and I'm happy to give this newly released DVD a very positive recommendation! - BGG reviewer EndersGame
1 of 1 magicians found this helpful.
Did this review help you? Do you want to respond to this review?
Bestsellers