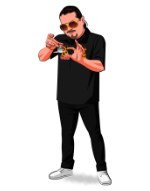 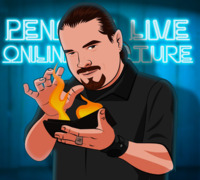 Today, when you order "Magick Balay LIVE", you'll instantly be emailed a Penguin Magic gift certificate. You can spend it on anything you like at Penguin, just like cash. Just complete your order as normal, and within seconds you'll get an email with your gift certificate.

"Magick Balay is not only the greatest magician I know, but the best Magic demonstrator I've ever seen." - David Roth

"Magick has been a strong influence in my tastes and performance since day one, when I met him as a teenager. He was the first person to show me that magic can actually be cool. As a real worker, he truly understands the craft, and his lecutre shouldn't be missed." - Doug McKenzie

"Balay has more than magic in his name - he has magic in his DNA and the marrow of his bones! When he lectures, what you will hear is the voice of experience!" - Michael Ammar

"Magick Balay's attention to detail is what makes his work so powerful for people in the real world." - Asi Wind

Magick Balay is a world-renowned close-up magician. Based out of New York City, Magick has entertained audiences across America for over two decades. He has consulted for multiple magic manufacturers and has been the head demonstrator at every professional magic company in Manhattan. You can catch Magick in his show “Close Up Kings” on the Syfy channel in the US, Discovery International in Europe, or OLN in Canada.

Magick is a highly sought after private entertainer and has had the privilege to perform for the likes of Michael Jackson, Wayne Gretzky, Britney Spears, Christopher Reeves, Derek Jeter, Neil Patrick Harris, Michael J. Fox, Edward Norton, Spike Lee, Lorne Michaels, and many, many more.

If you've never been to a magic lecture, there's never been a better time. Sunday, August 7th, at 7:00pm, we're streaming Magick Balay LIVE in a spectacular 2-hour online lecture. Watch and learn things you won't find in any book or DVD.

Very entertaining but... Report this review
Verified buyer Pro Privacy ON (login to see reviewer names) on August 11th, 2016
A bit ambigious about this one:

Con:
- Nothing really new (after almost every trick he says 'you know this one right? Or should I explain it?')
- Lacking references (after the Tyler Wilson overkill ;-> )
- A little but too much sexual jokes(rip your top off, you have my balls in your hands) for my taste.

In short: If you are a beginner you will find a lot of very cool and easy to do tricks.
If you are more advanced you will enjoy it but know most of it, but you will get some new insights on handling and performance.
11 of 15 magicians found this helpful.
Did this review help you? 3 comments

hes a worker Report this review
Verified buyer Pro Privacy ON (login to see reviewer names) on August 8th, 2016
definitely loves magic. it's contagious to his audience. he didn't do anything novel. just a lot of classic bar magic. if you are looking for material to do at your restaurant this is the lecture for you. i am at a point in my career where i am looking for crazy new material to keep me interested or a new tip on how to grow my magic business. that is not what this lecture is about. recommended you purchase this.
7 of 7 magicians found this helpful.
Did this review help you? 5 comments

Magick Live Report this review
Verified buyer Pro Privacy ON (login to see reviewer names) on July 26th, 2016
This is an easy purchase for me. I've had the extreme pleasure of seeing Magick
perform and absolutely destroy the minds of both laymen and magicians with his
smooth handling of even the most basic effects. He is a living legend of NYC magic and I'm looking forward to anything and everything that he shares on this lecture.

If you've never been to the magic shops in NYC that Magick performs demonstrations in or had a lucky chance encounter with him in a bar you really should check out this lecture. It'll encourage you and entertain you.
4 of 5 magicians found this helpful.
Did this review help you? Do you want to respond to this review?

Good magic, but... Report this review
Verified buyer Pro Privacy ON (login to see reviewer names) on November 20th, 2017
Very little of this is new. Very little of it is his.

And I’m all for teaching old tricks, but he doesn’t give detail, special touches, philosophy... just here’s a trick I learned somewhere, now I’ll teach you.

Further, he does the tricks well, but his presentation is almost exactly what the real pros preach against. It’s too quick, the magic moments he doesn’t ruin with bad jokes, he rushes past it. So, no one can digest that a bill just changed, or a wrapper got restored. He goes so fast it’s exhausting.

Positive note, though: the tricks are all workers and worth learning. They’re all worth doing.

Just do yourself a favour, if you watch this and want to do the tricks, take time to find other sources to aid your learning. Or at least put more thought into it than he does.
3 of 3 magicians found this helpful.
Did this review help you? Do you want to respond to this review?

The best there is hands down! Report this review
Pro Privacy ON (login to see reviewer names) on July 24th, 2016
Magick is the best. Every time I chill with him I always learn something new. And I'm not writing this review because I'm his friend. I'm writing it because from the times that I chill with him at the bar he just shows me good trick after good trick. Then he turns around and does them to people and they get reactions like you wouldn't believe. He should be called king of bar magic. Because he is simply the best. If you are looking for the coolest new magic gimmick don't waste your time on silly gimmicks. Because you Will learn how to get better reactions with the simplest of props. I predict the lecturer will get nothing but 5 star reviews. Congrats magick! And enjoy fellow magicians!
2 of 3 magicians found this helpful.
Did this review help you? Do you want to respond to this review?

My favorite lecture to date!!! Report this review
Verified buyer Pro Privacy ON (login to see reviewer names) on September 13th, 2017
I own around 20 to 25 Live lectures with some big-time names like Greg Wilson, Michael Ammar & many more amazing magicians. However Balay performs like a beast and his magic flows like I've seen no other replicate. He takes some old favorites that we all know & love and he makes you want to bring them back out again after seeing his routines and how he pieces it all together flowing from one trick to another. Please Penguin invite Magick back for round 2!!! As a matter of fact I'm about to watch this lecture again, it really is that entertaining. The magic isn't earth shattering, but the dialect & patter he shares with his performance and how to flow from one trick to another is invaluable compared to any knuckle-busting maneuvers and fancy sleight-of-hand. This is an extremely entertaining lecture, and very helpful in learning how to perform, interact with your audience & flow with your magic. Can't wait to see him come back again!!
1 of 1 magicians found this helpful.
Did this review help you? Do you want to respond to this review?

Wow Report this review
Verified buyer Pro Privacy ON (login to see reviewer names) on August 19th, 2016
This lecture taught me a lot! It further proved to me that you don't have to pull out all the fancy stuff to entertain people! We as magicians forget that we are performing magic for PEOPLE, not ourselves or other magicians. Simple sells! Just because it is "easy" doesn't mean that it isn't effective! Even if you are a seasoned pro, I would recommend this lecture. Don't read into those reviews where people are saying "stuff you already know." Sure, you might know a lot of stuff in this lecture. I did, but now I have a new found appreciation for the simple things. He even shows you real life examples for everything he teaches! So you know it works. I recommend this to everyone out there interested in close up magic. Solid stuff and great to see different perspective on things. Add to cart now!
1 of 1 magicians found this helpful.
Did this review help you? Do you want to respond to this review?

Master of his craft! Report this review
Verified buyer Pro Privacy ON (login to see reviewer names) on August 13th, 2016
It doesn't get old to see Magick perform and teach. His style of teaching is fun and easy. He is a master at his craft and I can say personally is because of Magick that I became a magician myself. I hope Penguin brings him back for a second lecture, he is well worth the price!
1 of 1 magicians found this helpful.
Did this review help you? Do you want to respond to this review?

Magick Balay lecture Report this review
Verified buyer Pro Privacy ON (login to see reviewer names) on August 10th, 2016
Excellent...good powerful,commercial magic....tricks that probably you know,but do not perform,but now you can using the great advise "Magic touch"Balay's touch.I have the pleasure of expend many hours of magic time with Magick..and he always amazed me....knowing magic for at least 20 years,, I assure that his routines "Kills". His attention to details and to make the difficult easy to understand will save you frustrations .
1 of 1 magicians found this helpful.
Did this review help you? Do you want to respond to this review?
Load more reviews
Bestsellers